Update on the sailing canoe Iosepa: 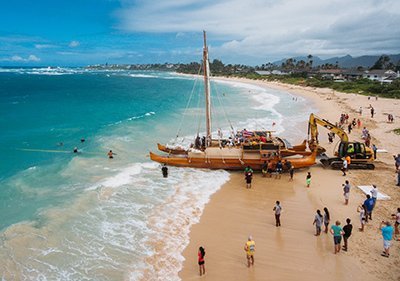 The Iosepa launches from Hukilau Beach on June 15, 2016. Photo by Mark Holladay Lee

Early plans called for Hawaiian Studies students and others to gain experience sailing along Windward Oahu, maybe circumnavigating the island, and possibly even sailing to the Big Island; but unfortunately, this year’s sail was plagued with logistical problems:

For example, the motorized escort vessel ITF swamped and overturned at its mooring off Hukilau Beach in the early morning hours on June 20. Though it was salvaged two days later and while no one was hurt, that vessel has already returned to its home port in Nanakuli, Oahu.

Iosepa co-captain (and PCC alumnus) Kamoa’e Walk said the BYUH Hawaiian Studies program tried to arrange for another escort vessel, but as originally scheduled, the sailing canoe was pulled from the water on June 29 and soon after returned to its permanent “home” at the Cultural Center.

• Watch a BYUH Ke Alaka’i video interviews with one of its captains, PCC artisan Kawika Eskaran, on the history of the Iosepa and the feelings it engenders among its student crewmembers at: https://www.facebook.com/kealakainews/videos/1687945398124642/

Other PCC and related news