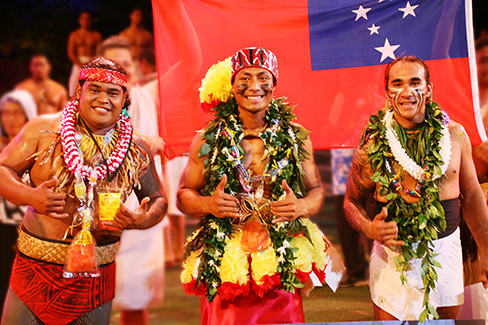 They competed during a special intermission of the Center’s sold-out evening show, Ha: Breath of Life, . . . and in the end by just one point, the judges awarded the 2017 title to Falaniko Penesa. As part of his first PCC World Fireknife Championship win, he claimed a $7,500 cash prize  — boosted from the normal $5,000 prize in honor of the event’s 25th anniversary — and a large ceremonial knife. 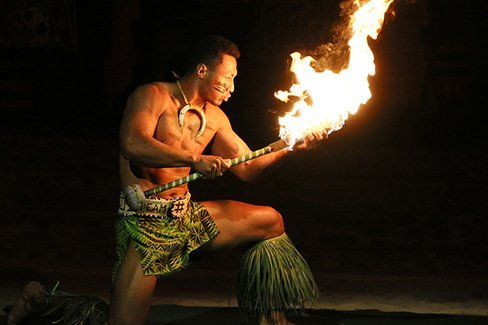 Penesa, 26, who is originally from Puipa’a, Samoa (near the capital of Apia), said he started learning fire knife dancing from his older brother at age 11. He has been performing for the past five years at Disneyland Hong Kong, and he has also appeared in Taiwan and Samoa. Penesa previously entered the PCC competition in 2014 and 2015, placing second overall both years.

“The Polynesian Cultural Center is very special to me,” he said.” I always like to come back again, because the spirit of the people and the brotherhood of the competitors is very good here.”

Oloa, 27, took up knife dancing as a boy when his father, Isi Oloa, started a family performing group in Orlando, Florida. Mikaele now lives in Waialua, Oahu, performs at the Chief’s Luau at Sea Life Park and operates a Samoan knife dancing school with about 30 students. He awed everyone as a 15-year-old intermediate competitor (ages12-17) in the PCC’s 2005 event when he jumped up to the open division (ages 18 and up). 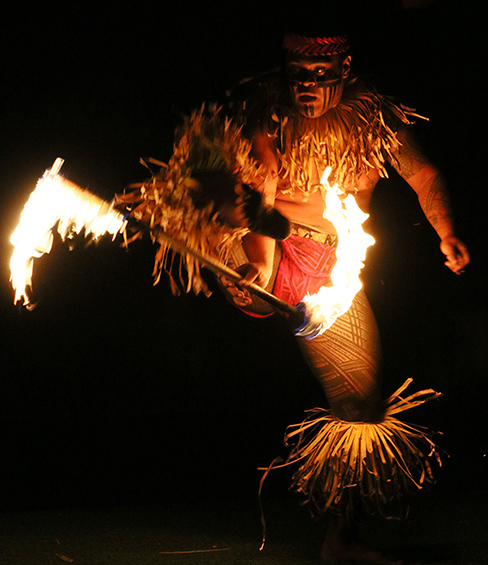 Mikaele Oloa during his finals performance

“I love dancing here at the PCC,” Oloa said. “I feel the most pressure here, but it’s the dream — where everyone wants to make it.”

Damaso, a Hawaiian from Waikoloa on the Big Island, performs there for Tihati Productions. He previously entered the PCC competition three times, making the semifinals twice; this was his first appearance as a finalist. 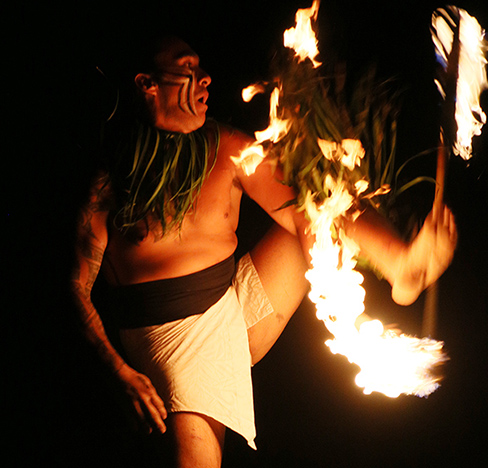 “The first couple of years I came, it was hard to get over the super-stardom of the other guys, but now it’s like a brotherhood. It’s nice to hang out and talk story with them,” he said. “It’s awesome, but everybody is very humble. I’m just living the dream: It’s all kind of surreal. All the cuts and burns are finally paying off.”

The other World Fireknife semifinalists

The three other semifinalists (in no particular order) included Achilles Tafiti of Laie; Hale Motu’apuaka of Aiea, Oahu, who just completed his junior year at Punahou School; and Matuni Vaia’oga from Samoa by way of Orlando, Florida.

Now 17, Motu’apuaka, a former junior and intermediate champion who has been knife dancing since he was three years old — appearing in exhibition at the Polynesian Cultural Center event that year, made his first appearance in the men’s open division this year.

Delsa Atoa Moe, PCC Vice President of Cultural Presentations, said, “For our 25th annual World Fireknife Championship, I think this is the best group of semifinalists I’ve ever seen in the history of the event. It could have been any of those six going on to the finals, it was that close. They’re that good. For the three finalists, we knew it was going to be close, and for Falaniko to win by one point, that was perfect. They are so good.” 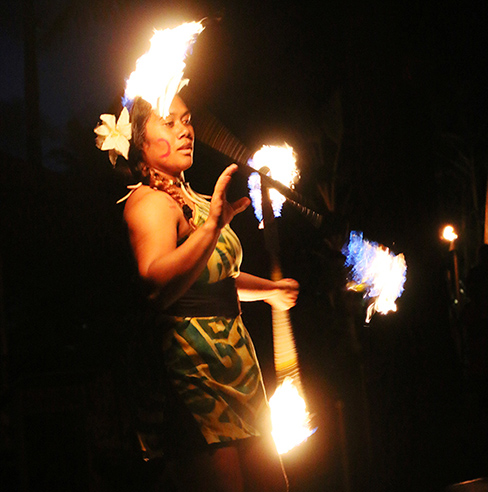 For the second time, a female captured the intermediate division championship: Jeralee Galea’i, 16, from Laie — home of the Polynesian Cultural Center — and the daughter of three-time former men’s champion David Galea’i and his wife, Grace, just completed her junior year at Kahuku High School. She performs regularly in the PCC’s Ali’i Luau show.

“I am just glad that I have had the opportunity to compete. I think the PCC is a great organization,” Galea’i said. “I also feel happy about winning, and happy for my dad, who’s always wanted me to win. I was 10 when he started teaching me.”

The other intermediate division winners were Justyce Edmonds, 2nd place; and Hunter Nery from Waialua, Oahu, 3rd place. Edmonds was cheered on by a large group of his family members, Samoans who originally migrated to New Zealand and now live in the Sydney area of Australia.

After all the fiery action had been completed, and friends and family were congratulating the 2017 champions, several other people with ties to the PCC Samoan World Fireknife Championship shared their reactions:

Mervyn Lilo, father of the three Lilo brothers who competed in the junior division and a former knife dancer who now oversees his own Polynesian group, Maohi Nui, in Honolulu, said, “It’s amazing to me to see so much competition at such a young age, how fast these kids are picking up the whole art of fire knife dancing. To see my own kids go through the journey of performing on this stage is also amazing.”

Andrew “Umi” Sexton III, a former champion in 2007 who competed again this year and performs regularly at the Paradise Cove Luau at Ko Olina, said he was “so blessed to be here as part of the 25th annual World Fireknife Championship. The level of competition is getting harder and harder. These young men put in hours or practice, put time in at luau shows and weddings. They’d done shows throughout the world before coming here to compete.”

Sexton, who also started knife dancing at age three, indicated he would be back again for next year’s competition.

And Delsa Moe, who is Samoan, added, “I was so impressed with the level of commitment they put into it, but the thing that impressed me the most was the spirit of brotherhood backstage. Before they went on, the three finalists had their own little huddle, their own moment, just them. It was not about the competition, it was about their respect for each other.”

As the crowd on stage at the Polynesian Cultural Center Pacific Theater started to thin, the consensus was that this may have been the best World Fireknife Championship ever — at least until next year.

In Samoan, the fire knife dance is called the ‘ailao afi, and the knife is called a nifo oti — “deadly tooth.”