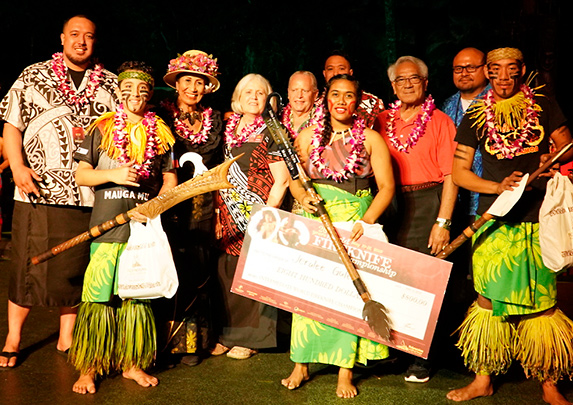 One by one on the second night of the Polynesian Cultural Center’s 26th annual World Fireknife Championship on May 11, 2018, each of the tamaiti (children 6-11) and teenage (12-17) “warriors” stepped onto a specially constructed stage in the Hale Aloha Theater to share an impressive range of skill and talent with Samoan fire knives and vie for the titles in their respective divisions.

After the flames died out, the drumming quieted, and championship awards were presented, six open division semifinalists who a panel of judges selected the previous night, competed again for three finalist spots. 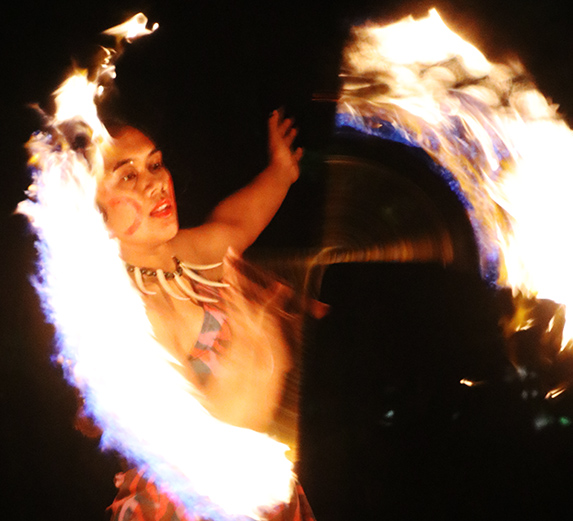 Jeralee, 17 and a senior at nearby Kahuku High School, is the daughter of David and Grace Galea’i of Hauula, Oahu. David — the 1999, 2000 and 2003 World Fireknife Champion who still performs in the Polynesian Cultural Center’s evening show, Ha: Breath of Life  — started training Jeralee when she was about 10 years old.

“I’m really proud of her, and happy for her,” he said. “This will be her last year of competition, because there is no open division competition for women, yet.”

He added that Jeralee, a 2018 Kahuku High graduate, plans to attend Utah Valley University in Orem and major in business. 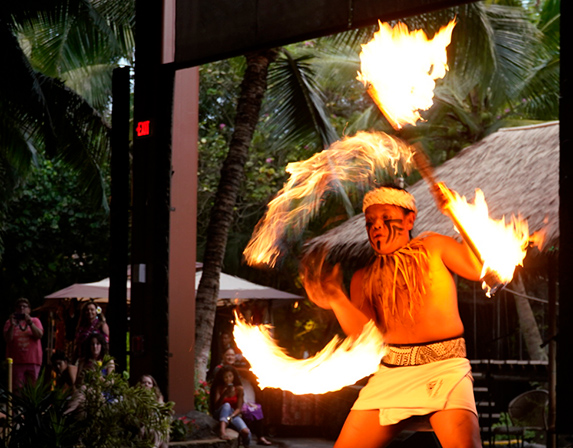 The other 2018 junior division winners were: Carmine Taetuna-Fautanu, 11, of Kealakekua, island of Hawaii, 2nd place; and Toa Tevaga, 11, from Kaneohe, Oahu, 3rd place. 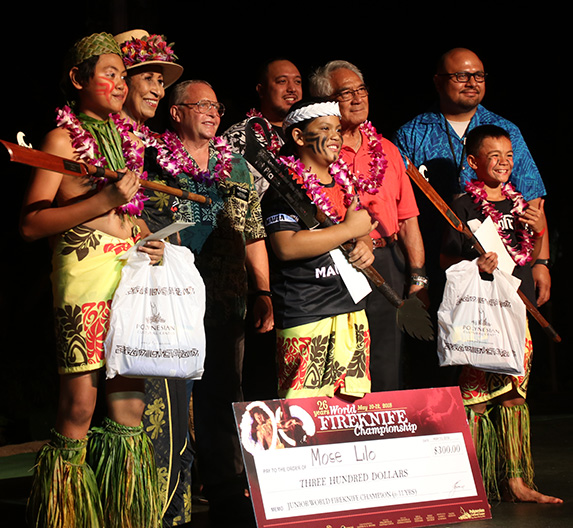 2018 junior division winners and some of the sponsors of the World Fireknife Championship.

Former champion comments on the competition

Former five-time open division champion Mikaele Oloa of Waialua, Oahu, who also trains about 20 youth in his Mauga Mu fire knife school, said this about the 2018 World Fireknife Championship . . . after 12 of his students competed:

“They did awesome. I am so proud of them. It was hard to keep the tears out of my eyes watching them. They worked so hard every day. I see them every week. I could really see the growth in them spin and just enjoy the brotherhood backstage. Now they have new friends from around the world that they can come back once a year and say hi to.”

Commenting on the open division finalists, Oloa added: “This was a tough year, and it was good to see new faces. Everyone stepped up. They were awesome, solid. Next year, we never know who’s going to come.”

Oloa, who last won the open division championship title in 2016, did not compete this year due to a back injury, but he plans to return to competition in the future.

While this 2018 event is the Polynesian Cultural Center’s 26th annual World Fireknife Championship, we added the intermediate competition two years later, in 1995. The 12-17 age range was the same then, although it was initially called the “junior division.” It was relabeled the intermediate division when the PCC added the current 6-11 age range junior division in 2002. Females started competing in 1995. There have also a duets and groups division from 2008-2013,

For several years now, intermediate-age competitors can choose to “move up” to the open division (ages 18 and above) — and several have done so spectacularly in the past, we add, but once a junior does move up he can’t go back down again.

And finally, Jeralee Galea’i is not the first young woman to win back-to-back World Fireknife Championships: Melanie Lesoa of Siumu, Samoa, won in 2002 and 2003.