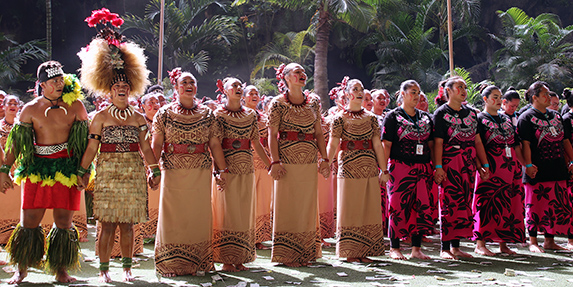 In addition to those in the audience, PCC emcee Delsa Atoa Moe, vice president of cultural presentations, said over 30,000 people also tuned in via live-stream internet.

The participating high schools (in the order they performed) were: Waianae, Kapolei, Waipahu, Radford, the ILH Poly Clubs (comprised of Samoan students and friends attending Interscholastic League of Honolulu private schools on Oahu), and Kahuku.

As is customary, the 2018 We Are Samoa Festival began with prayer, flag raisings, the anthems of independent Samoa, American Samoa, and the US, plus a traditional fashion demonstration by the PCC’s Samoan Villagers. Also, as they have done for centuries, a talking chief delivered a lauga or oratorical Samoan speech on behalf of the Center.

Although delivered in fa’aSamoa or the Samoan language, Matuauto Steve Laulu, the other emcee for the festival and PCC cultural islands director,  explained that lauga often contain specialized vocabulary, proverbs, historical sayings and historical references that many younger Samoans do not understand. He said this is why he was particularly proud of the individual students from the participating schools who stood in front of the audience and delivered their own lauga.

As the young talking chiefs in-training left the stage, PCC Samoan Village chief Tipa Galea’i and his young men quickly set up the games. This part of the festival has pretty much been the same for over 20 years, and it’s the only part that’s still a competition of sorts, but all in the spirit of fun. Every year the audience loves and appreciates the high school students for attempting to demonstrate these skills — or not.

The students compete in four common activities all kids used to learn growing up in Samoa, but in many cases now are far removed from young urban Samoans on Oahu. Here’s how they did:

■ Coconut husking (o’a popo): Samoans traditionally use a sharpened stick (mele’i) to pry (o’a) the husk off mature coconuts. All the resulting coconut parts get used for something. For example, in addition to making food, the coconut meat can be dried into copra and sold for its rich oil content.

There’s definitely a certain knack to piercing the coconut on the sharp stick, pinning the top end against the stick and pressing the nut down to leverage off strips of husk. A few high school kids blazed through, while others needed to go to coconut husking school. The results:

Even We Are Samoa Festival audience members got a chance to participate in the coconut husking challenge. The man in blue (center-right) was exceptionally fast.

■ Banana peeling (fo’e fa’i): Boiled and/or baked green bananas are still a staple food among Samoans, but there’s a catch. Green banana skins are hard to peel. They tightly glom onto the fruit, have sticky sap, and custom demands the peeled bananas remain near-perfect and unbroken. For centuries Samoans have used a semi-sharpened stick to accomplish this. The results: 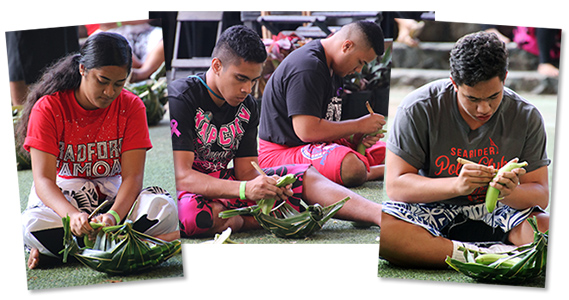 High school students from (left-right) Radford, Kapolei and Waianae fo’e fa’i — peel green bananas in the ancient way during the We Are Samoa Festival games.

■ Coconut-leaf basket weaving (lalaga ‘ato): Samoans have woven coconut-leaf baskets — and many other useful items — as containers for centuries. As with the banana peeling, custom requires this be done efficiently and neatly, but weaving baskets is definitely harder than the first two games . . . and over the years of the We Are Samoa Festival, few of the high school students finish in the allotted time. Some of the results are based on how far they got: 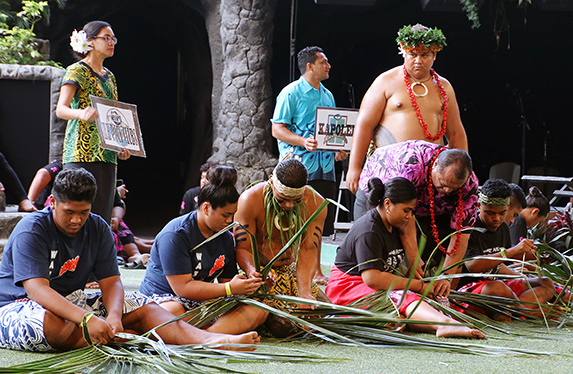 The We Are Samoa Festival high school students get off to a good start in the coconut-leaf basket weaving demonstration.

■ Fire making (si’a afi): Several times each day the young men in the Polynesian Cultural Center’s Samoan Village demonstrate making fire by literally rubbing two sticks together. They’re so good at it, they make it look easy. That’s how Samoans have been doing it for hundreds of years.

But like many skills, it takes practice . . . and most of the high school students in the festival have never had to light their stoves this way. Several of the teams generated enough friction to create smoke, and a few even gently transferred the heated ash to coconut husk fiber. But, in fact, only one team this year managed to coax that ash into flame: Congratulations, Waianae High.

During the We Are Samoa Festival intermission, while the large crowd enjoyed Samoan plate lunches and other treats, the PCC invited two groups to entertain them during intermission:

■ Le Fetu Ao Samoan Language Center: Le Fetu Ao is a private school in Honolulu designed to instill traditional Samoan ways in students who are growing up far from the home islands of their ancestors. Under the direction of executive director and founder Elisapeta Tuupo Alaimaleata, the school offers weekly classes in language and Samoan dance for students. They range in age from pre-school to adults.

■ Nesian Pearl, a small group of Samoan women, came from Melbourne, Australia, to share their talents. The classy group, like the Samoan students in Hawaii, is trying to learn and preserve aspects of their culture. They also performed during intermissions of the earlier PCC World Fireknife Championship events in the Hale Aloha Theater.

As much as everyone enjoys the annual Samoan games, it’s really this next part of the We Are Samoa Festival program that everybody’s been waiting for — the fa’afiafiaga or celebrations with song and dance. And if some of the students struggled with the traditional skills competition, it’s hard to overstate the creativity, energy, and enthusiasm they put into their respective performances.

True, each group shared customary numbers such as the sasa (a group dance normally performed while standing), ma’ulu’ulu (a group dance normally performed while sitting), and fa’ataupati (boys’ slap dance), but they often added a few non-traditional moves to these. It’s also the expected role of a fa’aluma — the group leader — to keep things lively and hilarious with his or her antics.

Each group, however, reserved the taualuga number — the highlight dance of the high chief’s daughter or taupou — for its most traditional presentation.

For those not familiar with Samoan custom, the taupou enters, highly adorned wearing a special headdress (the tuiga) and costume, and often glistening with scented coconut oil. As she dances her solo, family and other audience members may come on stage and shower her (and other students) with money. (BTW, all of the money went to the participating schools.)

Sitting on the Western shores of Oahu, Waianae High School is the farthest of the performing clubs from the Polynesian Cultural Center. Their enthusiasm and spirit was greatly appreciated by all. Jiahnyah Muli’agatele, a junior, serves as club president. The Talosaga and Maheleone Vaoali’i family was well represented as their daughters Jada Lynn performed as the taupou and Jewelyn the fa’aluma. Even their son, Junior, delivered the lauga (talking chief’s speech) earlier in the day. 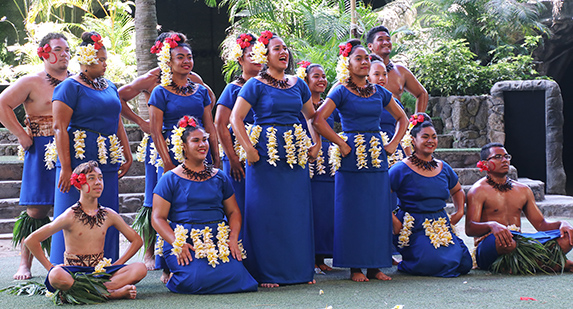 The Kapolei High School — which also included participants from Campbell, Farrington, Moanalua, Radford and Waipahu high schools — paid tribute at the outset to their “beloved” advisor, Esther Reid-Trani, who recently passed away. The other advisors were Ateliana Gaea, Vela Helenihi and Lisiate Heimuli. Pesefea Fiaseu “Jr” and Senior Seiuli were instructors. 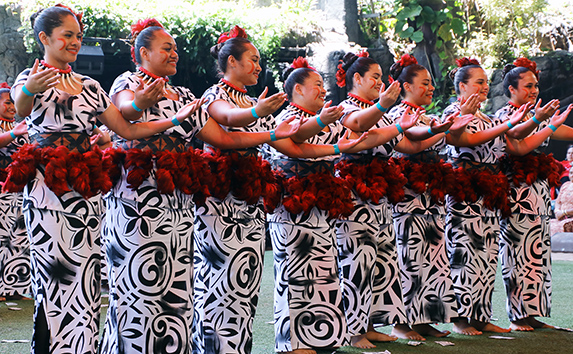 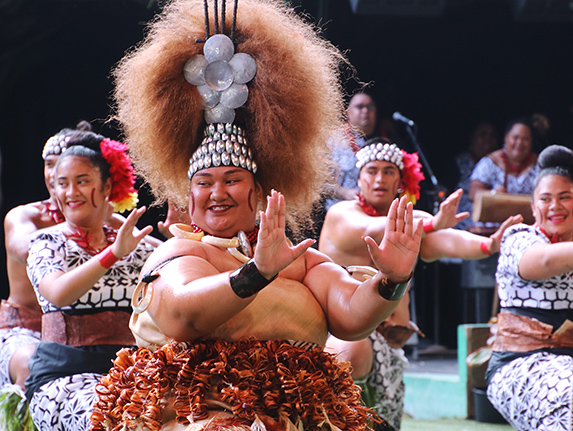 Radford High School, with their taupou in front

The ILH group started their performance by reenacting the 1830 arrival of Christianity in Samoa. The girls wore hats, as do women attending various churches in Samoa and the South Pacific traditionally do to this day. 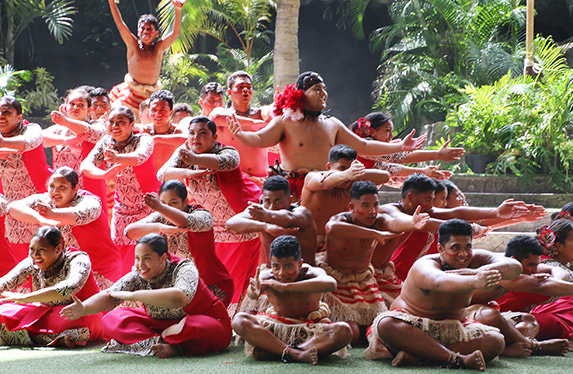 …is just a few miles away from the Polynesian Cultural Center, and over the years many Kahuku High students have worked and performed at the PCC. In fact, some of the students who appeared in the 2018 We Are Samoa Festival might become PCC employees in the future.

For their final number, Kahuku High invited the Kapolei High students to join them on stage for another tribute to their recently deceased advisor, Esther Reid-Trani. She previously lived in Laie and had family ties in the area.

Kahuku High School’s taualuga shows how the crowd gets into the number by showering the taupou (and others) with money and even dancing with her in the background.

History of the PCC We Are Samoa Festival

About the time the PCC started the World Fireknife Championship 26 years ago, the late O’Brian Eselu, a Samoan and noted cultural leader and entertainer who was born and raised in Hawaii, also started an event so Samoan high school students could celebrate their ancestral culture. He held the event, which quickly became more popular, at the old Lanikuhonua estate (near Kapolei).

When Eselu got sick a few years later, he didn’t want the event to stop. So, he approached Pulefano Galea’i, a senior PCC manager at the time and founder of the World Fireknife Championship, and asked if the PCC would take it over. The rest of the event’s story is happy history. Unfortunately, Eselu passed away in 2012, but in an interview during the 2011 We Are Samoa Festival, he said, “PCC has done a fabulous job.”

After taking over the festival, Galea’i got permission from American Samoan singer/composer Fa’anana Jerome Grey to use the title of his popular song, We Are Samoa, as the name. (Since he wrote it in 1992, Grey’s song had become an unofficial anthem for all of Samoa.)

Fa’afetai tele lava (thanks a lot)

Near the end of the program, Steve Laulu again thanked the audience and students. “This year was special, and it was particularly good to see that the high school students are getting more and more into fealofani, the mutual respect for one another.”

Delsa Moe expanded on that: “A few years back we changed the high school format for the We Are Samoa Festival from a competition to a non-competitive event to eliminate tension among the schools and foster harmony through the Samoan culture. The organizing committee was initially concerned this change might result in lowering the performance quality of the schools, but this has not been the case at all.”

“As knowledge of their Samoan heritage increases, so does their pride. This has been reflected each year as we’ve witnessed continual improvement in their performances,” she said. “The quality of this year’s performances was probably the best ever.”

Sponsors for the event

Another big FA’AFETAI TELE LAVA goes to the generous sponsors of the Polynesian Cultural Center’s We Are Samoa Festival and 26th annual World Fireknife Championships:

Special recognition also goes to the judges and evaluators, and event founder Pulefano Galea’i, an aloali’i or high talking chief in the Manu’a islands of Samoa.