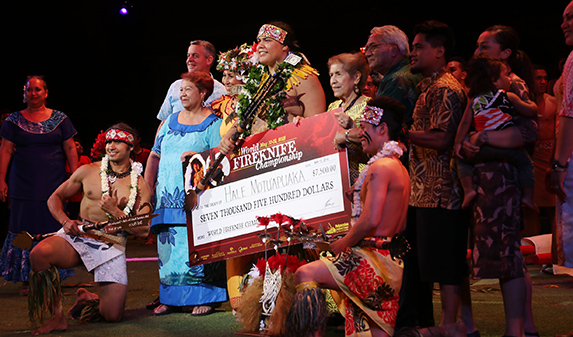 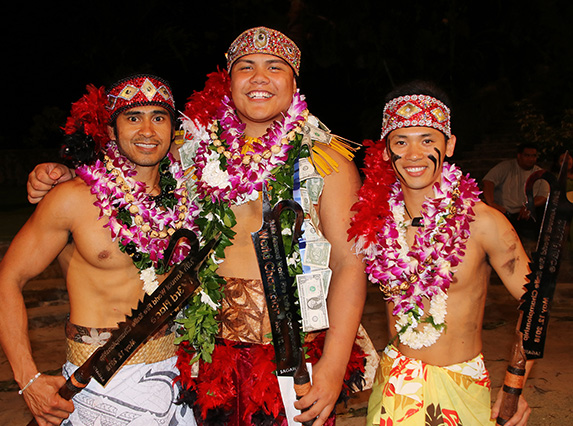 ■ Hale Motu’apuaka— a 2-time former junior division champion (ages 6-11) in 2008 and 2011, and a 3-time former intermediate champion (ages 12-17) winner from 2014-2016, was awarded first place in this year’s 2018 open division title of the World Fireknife Championship held at the Polynesian Cultural Center. After two nights of preliminary competition, the finale was held on May 12th with the 3 finalists during the intermission of the evening show, Ha: Breath of Life. After a blazing display of creative tricks and skills from the finalists, Motu’apuaka scored the highest by the panelists and was crowned the 2018 World Fireknife champion at the end of the show. 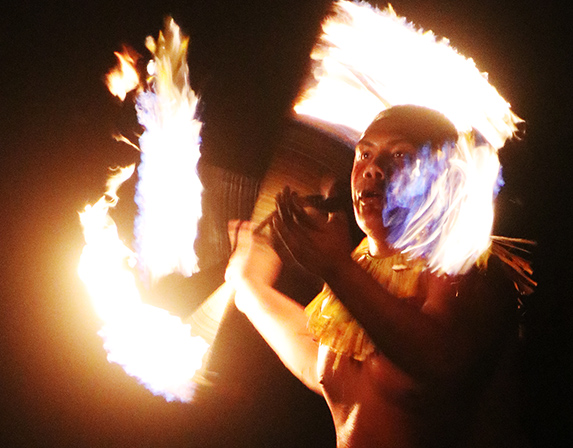 “He’s held more world titles than any other competitor,” said Delsa Atoa Moe, PCC vice president of cultural presentations. “From 2006-2016 Hale placed in the top-3 of whatever division he was competing in, so his 2018 open division title is the cherry on top of an impressive fire knife competition history for this outstanding young man.”

A number of “firsts” in the 2018 championships

Moe also added this is “the first year none of the winners are Samoan. Motu’apuaka is a local Tongan/Hawaiian, Yuya is from Japan and Cadousteau is a Tahitian by way of the US mainland (after working in Hong Kong).”

Motu’apuaka to take a break from fire knife competition

Motu’apuaka said he will not be back to defend his title in the 2019 World Fireknife Championship. “After 14 years, this is going to be my last competition for a while. I want to thank everybody. I’ve known some of the competitors for a long time now.”

Following his graduation from Punahou School in Honolulu at the end of May, Motu’apuaka said he will report to Utah State University in Logan, Utah, where he has accepted a full football scholarship (from among nine offers) to play on the defensive line. “I’m very excited. I leave June 10th.” He added he hopes to study business marketing at USU, and then come back to Hawaii.

Motu’apuaka also said he first appeared in the Polynesian Cultural Center’s World Fireknife Championships in 2004 when he was only four years old (the minimum age for competitors then-and-now is six). He’s been performing professionally since he was five, and more recently he’s been working various fire knife gigs three-to-five days a week.

■ The judges awarded 2nd place to Matsushima Yuya, 24, from Fukushima Prefecture in Japan, who has been knife dancing professionally back home for the past three years. 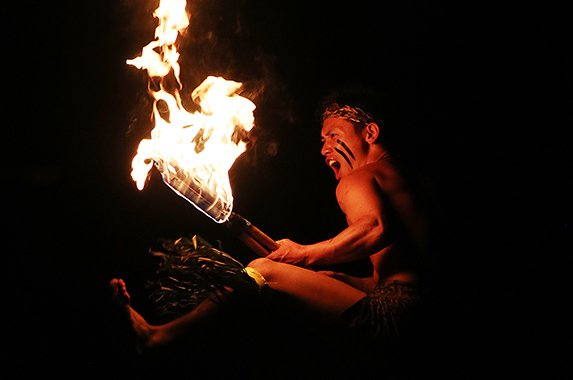 With the translation help of PCC Asia marketing manager Masa Kunihiro, Yuya said he started to teach himself about 15 years ago. “I first started watching videos to learn, and there are also Hawaiian shows in Japan that I watched. He added he first entered the PCC World Fireknife Championship competition in 2015 but did not place that year.

“This year is like a dream,” Yuya continued. “I know I am smaller than the other competitors, but I was very pleased to see how well the audience and judges reacted. I hope to return again to try to win the championship.”

In addition to the title, Yuya won a $5,000 cash prize, a stylized nifo oti knife and a palefuiono — ceremonial crown. 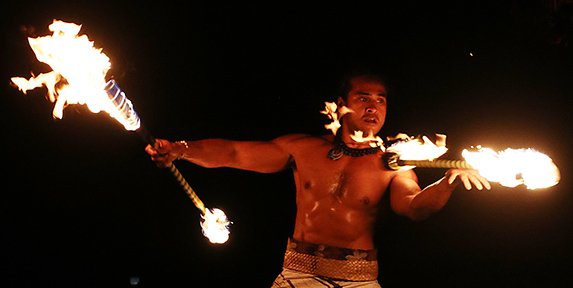 He is originally from Papeete, Tahiti, but performed for the past seven years at Disneyland Hong Kong. This past February he moved to Vancouver, Washington, to be closer to his wife’s family, and hopes to get some gigs in that area. They have two small children and another on the way.

“On the first day of the competition, my wife called and said my work visa application has been approved, so we’re excited about that,” Cadousteau said. “The first time I worked professionally was for Disney Hong Kong, and when I joined them, I knew this is what I wanted to do. So, I don’t think that I will stop. It’s just part of me now.”

The 38-year-old Cadousteau added, however, “The older I get, the more I have to work on my health and physicality, especially to keep up the stamina and strength to compete and handle the weight of the knives. I keep working out every day, because I know I always have to be in shape.”

“This year was kind of hard because leaving Hong Kong and moving to Washington cut into my training.” Cadousteau continued. He said he was also surprised not to see Mikaele Oloa (who is recuperating from a back injury) competing. His Hong Kong workmate, Falaniko Penesa, the 2017 champion, also got injured and didn’t compete in the 2018 World Fireknife Champion event. “But I’m still glad to be a part of it.”

However, Cadousteau said he was glad to meet other new competitors this year at the Cultural Center. For example, he said he saw Yuya compete in Japan earlier this year, “and I knew he would be a big surprise in the World Fireknife Championship. He’s very good. I was excited to meet him and see him leading a new generation of fire knife competitors.

From a field of 19 fiery “warriors”

Judges selected the three 2018 World Fireknife Championship finalists from a field of six semifinalists who competed on May 11 in the Hale Aloha Theater. The other three semifinalists (in no particular order) were Via “VJ” Tiumalu, formerly of Orlando, Florida, who now lives and works on Maui; Kepanipaa Damaso of Waikoloa, island of Hawaii; and Wallen Te’o of Honolulu. The Polynesian Cultural Center gave each of them a $500 honorarium.

The Polynesian Cultural Center started the preliminary round of open division competition in the 26th annual World Fireknife Championship on May 10, 2018, in the Hale Aloha Theater with a field of 19. Several others who had previously competed anticipated entering again this year but withdrew due to injuries.

From all of those who attended the events, and the more than 30,000 others who tuned in on live-stream internet each night, FA’AFETAI TELE (thanks very much) and MALO LAVA (congratulations) to all of you for sharing your incredible skill and talent with the world.