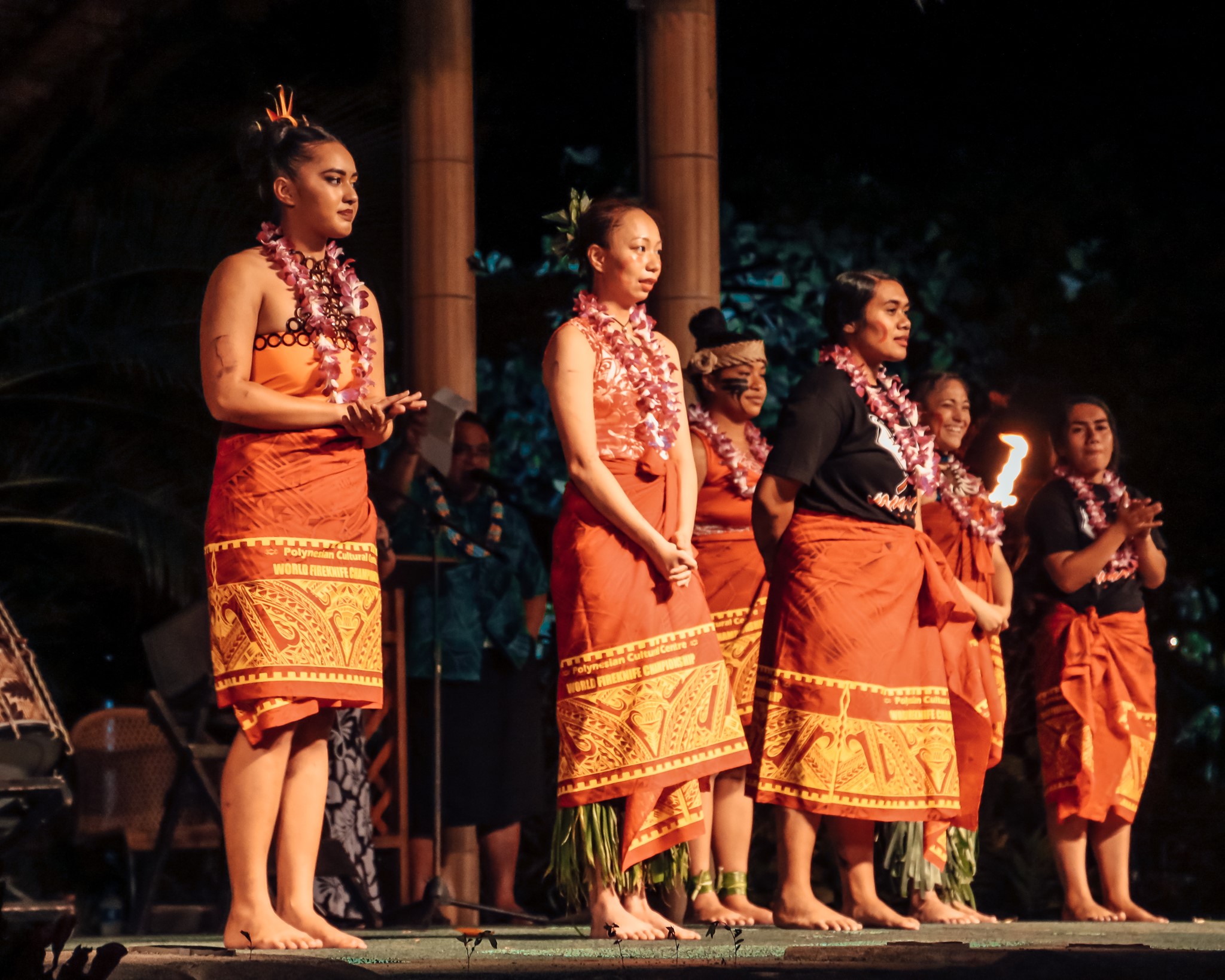 Along with the men’s championship, the Polynesian Cultural Center’s annual World Fireknife Championships includes three other divisions of competition — the women’s open, juniors (ages 6-11), and intermediates (ages 12-17), were held in conjunction with the We Are Samoa high school cultural arts festival. All these events were held this year from May 8-11, 2019, in La’ie, Hawaii. Here are the winners in the other three fireknife divisions: 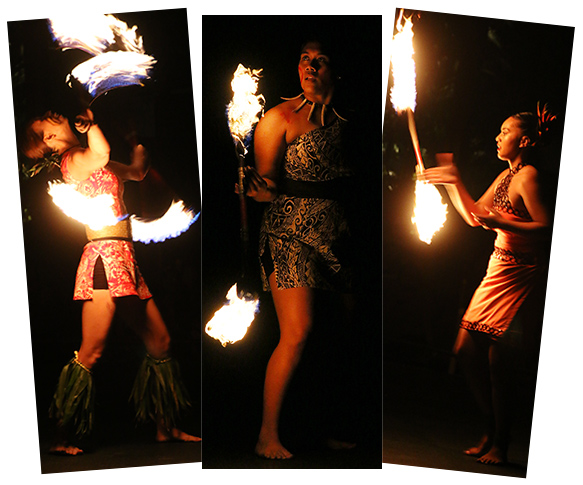 Congratulations to our 2019 women’s World Fireknife Champion Jeralee Galea’i of Laie, Oahu. Judges selected her as one of three finalists on May 8. The three finalists staged a run-off the next night, May 9, in Hale Aloha after the men’s preliminary competition. In addition to a hand-carved trophy knife and other cultural gifts, she won a $2,000 prize.

Jeralee, a BYU-Hawaii business student, began placing in Polynesian Cultural Center fire knife competitions against the intermediate boys in 2015 and 2016. Then, in 2017 and 2018, she won the intermediate division title.

It’s a bit of a family tradition, or as one of the emcees said, “It’s in the blood.” Jeralee’s father, David Galea’i, is a three-time men’s champion (1999, 2000 and 2003). Her uncle Alex Galea’i won in 2004; her grand-aunt Vatau Galea’i Neria was the first female knife dancer when the Polynesian Cultural Center opened in 1963; and her famous grand-uncle, Pulefano Galea’i, founded the PCC’s World Fireknife Championships 27 years ago.

“Congratulations to our hometown hero, Jeralee Galeai, on winning this prestigious championship and earning a title that only she can claim this year,” said PCC president and CEO Alfred Grace. “We have watched Jeralee get better every year and her outstanding performance tonight was evident of how hard she has worked to become the best woman fireknife dancer in the world.”

An international mix of women runners-up

The judges named Moemoana Schwenke from Sydney, NSW, Australia, as the first runner-up. In addition to a hand-carved trophy knife (carved by female carvers, by the way), she received cultural gifts and a $1,500 prize. Now a year out of high school, Schwenke works with her mother and father’s Polynesian cultural arts school in the Liverpool section of Sydney.

“Fire knife dancing is a favorite of mine,” she said, “and I try to teach as many girls as I can. I’d like to see more females competing.”

Huang Sih Ping from Taipei, Taiwan, came by way of Disneyland Hong Kong and won the second runner-up spot. She also received a trophy knife, cultural gifts and a $1,000 prize.

The 2019 men’s champion Falaniko Penesa, who works with Huang in Hong Kong, helped train her, but quickly added it was her own rapidly acquired skills and determination that helped her win a recent championship in Okinawa, Japan.

Actually, women and girls have been competing in the PCC’s World Fireknife Championships for almost all of the past 27 years. This is not the first time the championships included a women’s open division.

Tagaloataoa Delsa Atoa Moe, PCC vice president of cultural presentations, said, “We’re very proud of all these competitors. The fact that we had seven women in the preliminaries this year shows how much the interest has grown. Even five years ago we would not have been able to get seven good women contenders in this category.”

“And the fact that our finalists consisted of somebody from Hawai’i, another from Australia and the third from Taiwan indicates how international this event has become among women,” Moe added. “We believe the women’s competition will continue to grow.” 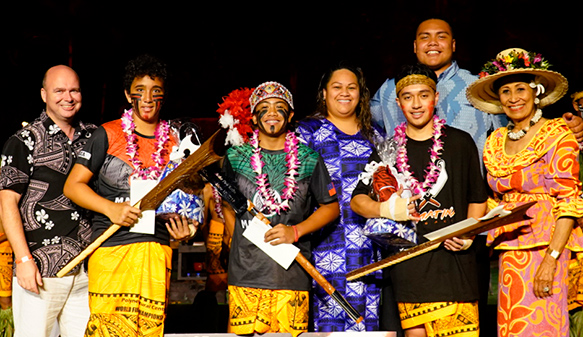 Again, it might be “in the blood”: Matagi’s father, Mervyn Lilo, a knife dancer who operates his own Maohi Nui halau (school), started training him. He’s also currently one of Mikaele Oloa’s young students. As a past junior division champion in 2015 and 2017, plus being a finalist in 2016, Matagi is definitely someone we need to keep watching in the future. 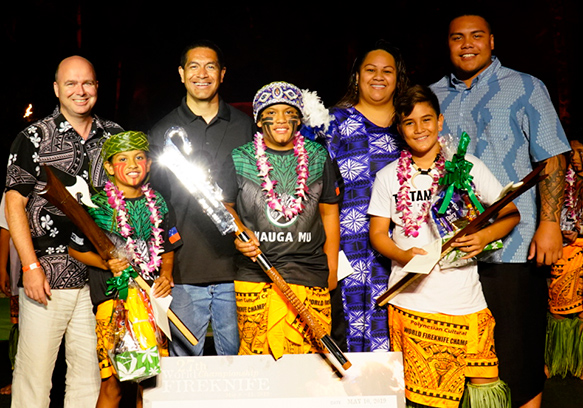 The judges picked Mose Lilo as the winner in the junior division. Like his older brother, Matagi Lilo, Mose is a familiar figure in the PCC fire knife event winner’s circle: He previously won in 2018, and placed each year from 2014-2017.

See you next year

In short, 2019 was another great year for family and fans to watch a gathering of the best Samoan fire knife dancers in the world. Soifua (live well) until next year.

Story and photos (except where identified otherwise) by Mike Foley, who has been a full-time freelance writer and digital media specialist since 2002. Prior to then, he had a long career in marketing communications, PR, journalism and university education. The Polynesian Cultural Center has used his photos for promotional purposes since the early 1970s. Foley learned to speak fluent Samoan as a Latter-day Saint missionary before moving to Laie in 1967, and he still does. He has traveled extensively over the years throughout Polynesia, other Pacific islands and Asia. Though nearly retired now, Foley continues to contribute to PCC and other media.