2019 Moanikeala Hula Festival – a week of celebration and learning 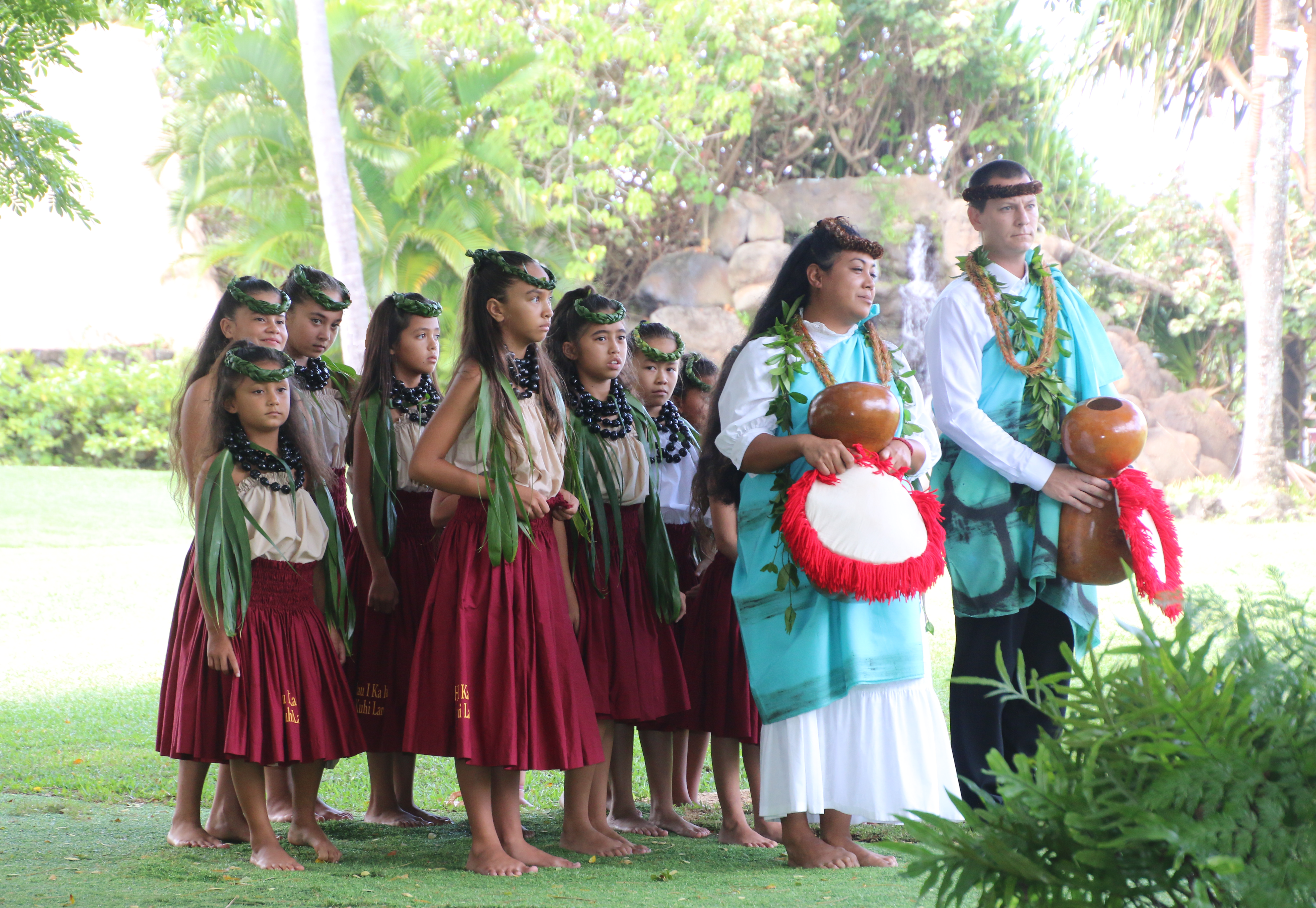 People all over the world love Hawaiian hula dancing, and serious hula dancers have much respect for their kumu (teachers). Haumana or students join halau (schools) based on the styles, traditions and reputation of the kumu. In Hawaii, it’s common for some haumana to remain in the same halau for years, ranging from keiki (children) to kupuna (elders).

Hula knowledge is traditionally passed down over years of rigorous training and performances. Kumu learned the same way from their kumu— who might be someone in their own family lines. Even if not, kumu often trace their respective hula genealogies.

At the discretion of some kumu their best students might uniki (graduate). They become an olapa, (dancer), a hoopaa (chanter), or a new kumu, who does both. It’s common to hear such graduates talk about their hula brothers and sisters for the rest of their lives, and they almost always pay a great deal of allegiance to the kumu who taught them and the traditions they learned. 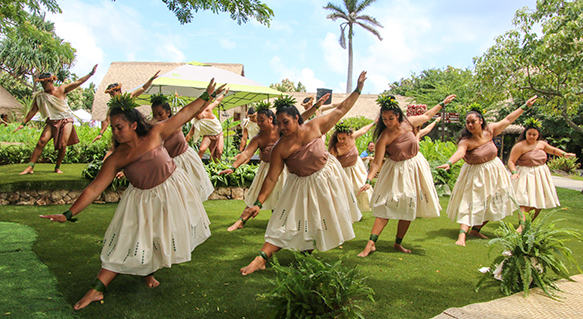 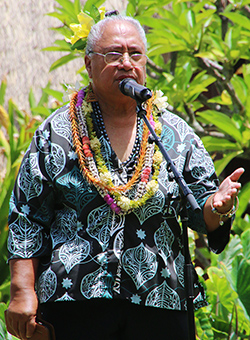 Ellen Gay Dela Rosa, niece of Aunty Sally and one of her hula graduates.

Dela Rosa explained Aunty Sally was born on Maui but raised in nearby Kahana. She traveled extensively as a young performer and gave up her own hula studio in Kaneohe when she agreed to become PCC’s first kumu in 1963. “She did so much for the Center,” Dela Rosa said. Aunty Sally retired from PCC in 1980, but she continued to work as a hula consultant until passing away in 2000.

Almost 30 years ago Dela Rosa’s sister, Victoria “Sunday” Kekuaokalani Mariteragi, convinced the Cultural Center to start the Moanikeala Festival. Though still a sophomore in high school, Aunty Sally drafted her niece as one of the original PCC hula dancers. Later, under her aunt’s tutelage, Meriteragi went to uniki along with her sister Dela Rosa and hula brothers, Keith Awai and Cy Bridges. She worked most of those years at nearby Kahuku High School, and with Aunty Sally’s encouragement, started her own halau for children in 1981. By special arrangement, her group continues to practice at the Polynesian Cultural Center.

“On behalf of my family, I want to thank the Hawaiian Village for honoring Aunty Sally,” Dela Rosa said.

“Thank you, Aunty Ellen Gay,” Krueger responded. “These kupuna, people who raised us and taught us, are so important that we continue to remember them and tell their stories.” 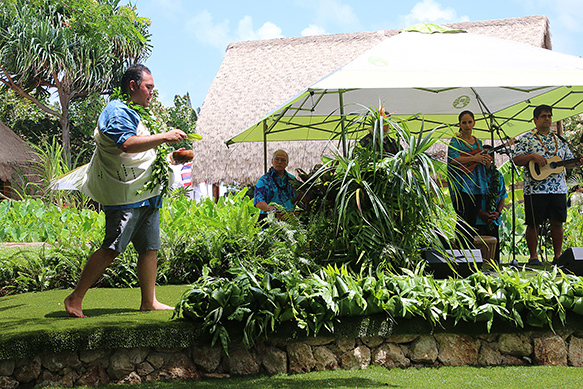 PCC kumu hula Pomaika’i Krueger (left) performs a traditional blessing on the Polynesian Cultural Center Hawaiian Village’s new pa, a hula stage of ancient origin. The new pa is named Ululauieie after the leaves of the ieie plant in the center.

Krueger explained the new pa is named Ululauieie. “Ulu means to grow [in Hawaiian],” he said, “and lauieie are the leaves of the ieie, a very significant plant in Hawaiian culture. Its blossom represents a royal birth and it was sacred to Laka, the ancient goddess of hula. The leaves of the plant are also where Laie gets its name.” 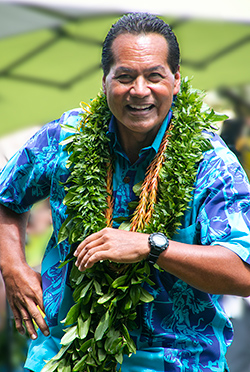 “We hope giving this name to this stage will help it to become an elevated area for people to showcase excellence in hula,” he continued. “All the practice and growth that many students have given will be displayed on this stage. This is also where we will share our hula lessons with many visitors from around the world. This is a space for them as well, as they learn and interact with us.”

In a prayer for the day, kumu hula and PCC retiree Keith Awai asked that “this hula platform may be a place of sharing knowledge of cultural practices and opportunities to learn, but most of all to enjoy hula.”

How do Hawaiians honor kumu and hula? With different halau sharing their hula and beautiful Hawaiian music, of course. Krueger first called up Hui Hooulu Aloha, the Polynesian Cultural Center’s own halau, which was started almost 40 years ago. It consists of PCC Hawaiian Villagers, BYU-Hawaii students and interested dancers from the community.

She added that Krueger “only took the men to compete this year while he continues to build our halau. They also participated in the Prince Lot Hula Festival this year and last year.”

For their first number, they performed a traditional hula “used today in calling together all the Hawaiians and all the people who call these islands home,” said Krueger. “This hula also reminds us that we are always connected to our ancestors.”

For their second number, the PCC halau did an oli or chant composed by Hawaiian Village manager Naauao Panee which describes how the villagers work with their hands and tell the stories of their ancestors.

“We do it together. We do it humbly, and we do it for our people and the pride of our nation,” said Krueger. 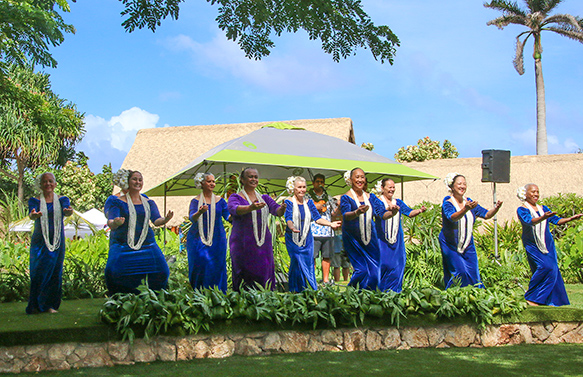 Other events earlier in the week 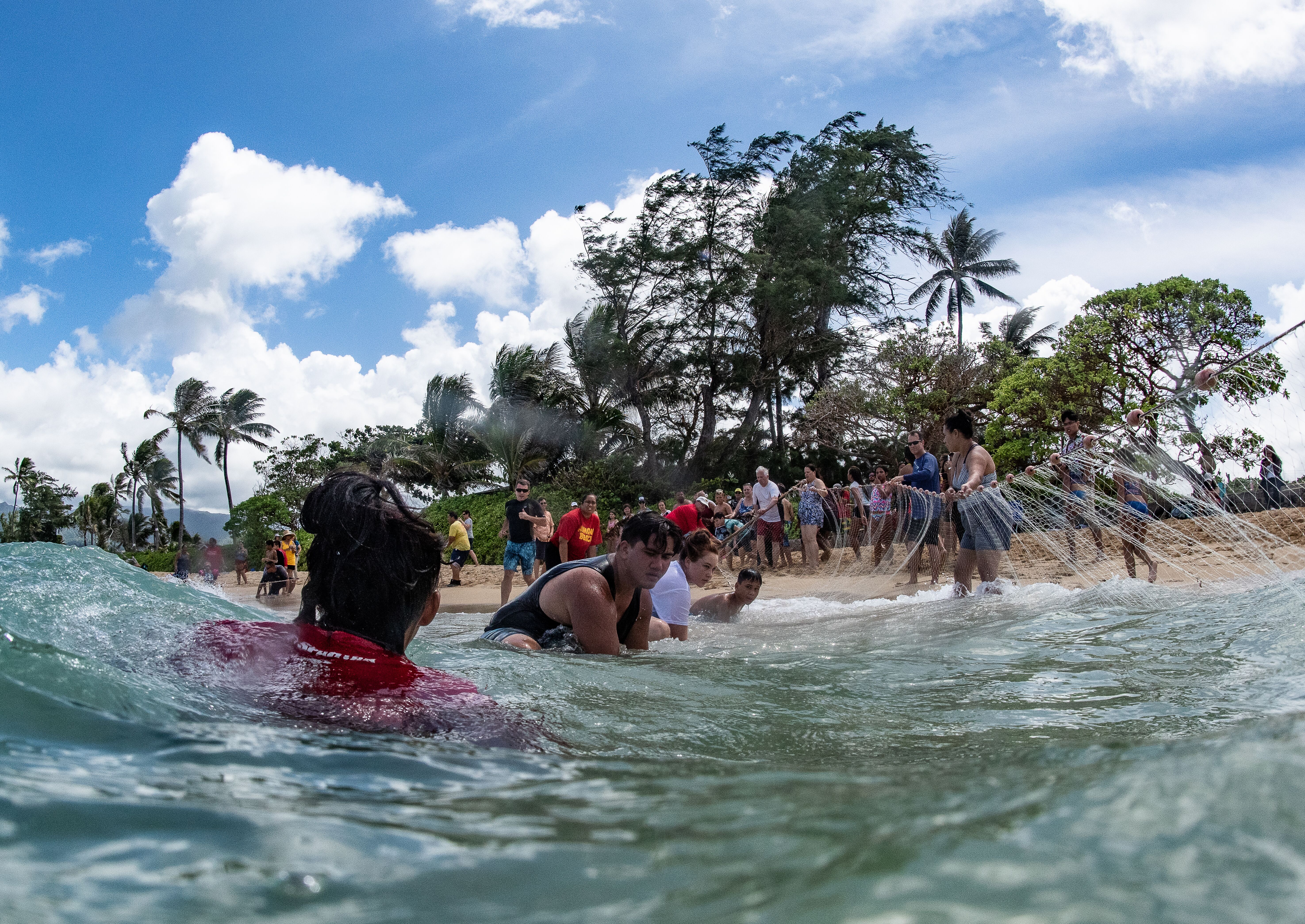 A beautiful day greeted participants in the opening Hukilau event. 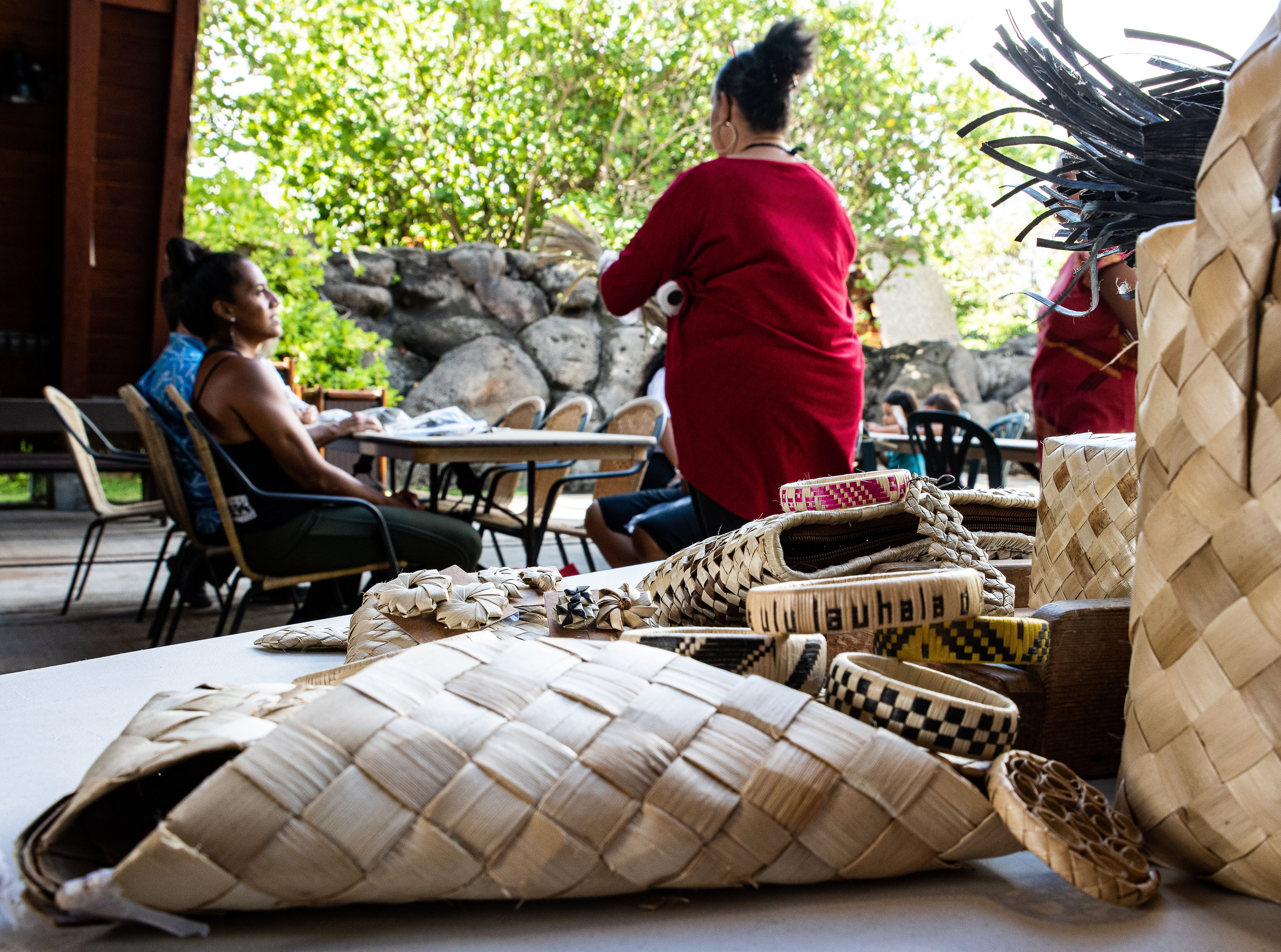 Lauhala class at the Center 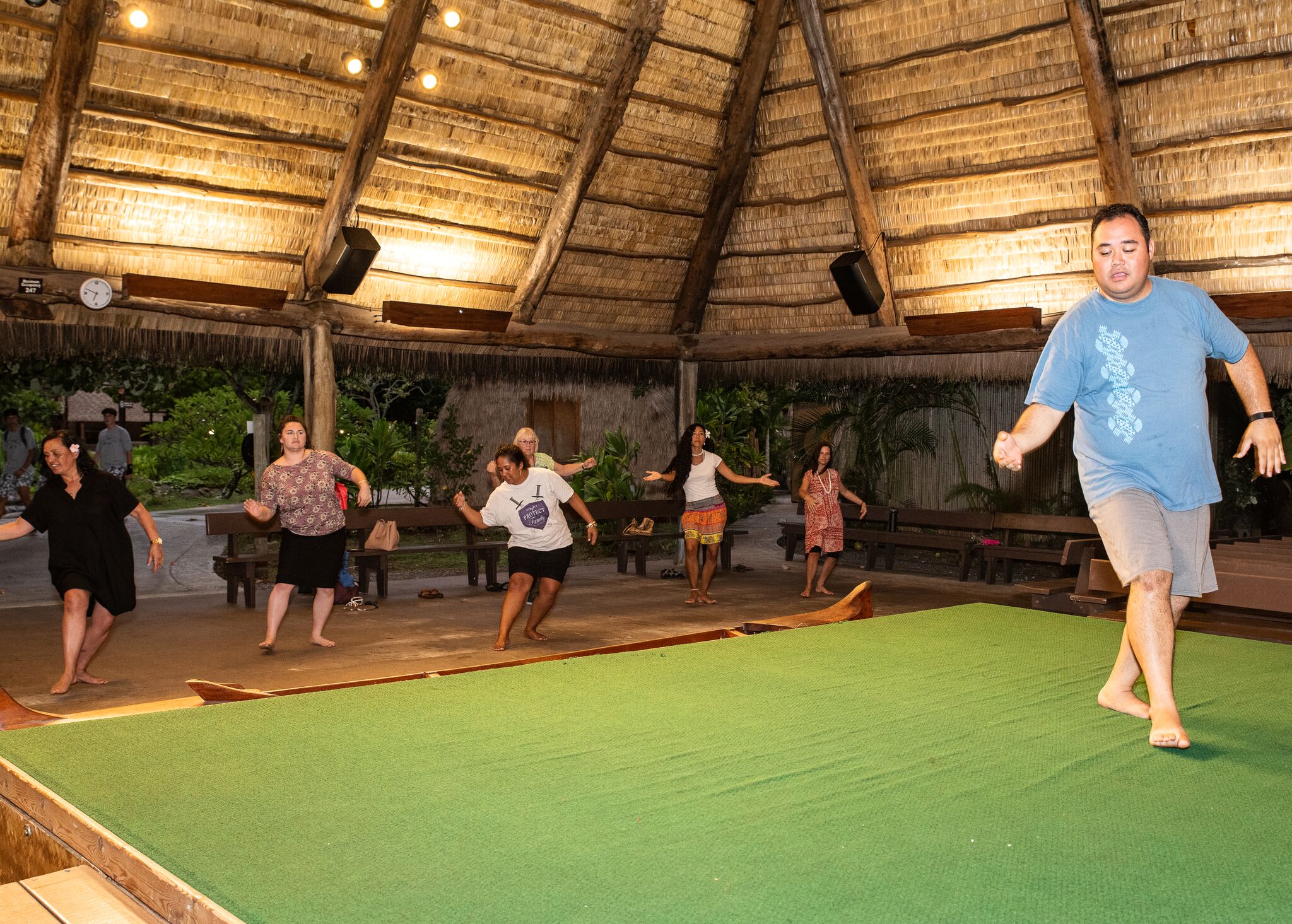 At the Courtyard by Marriott Oahu North Shore Hotel: 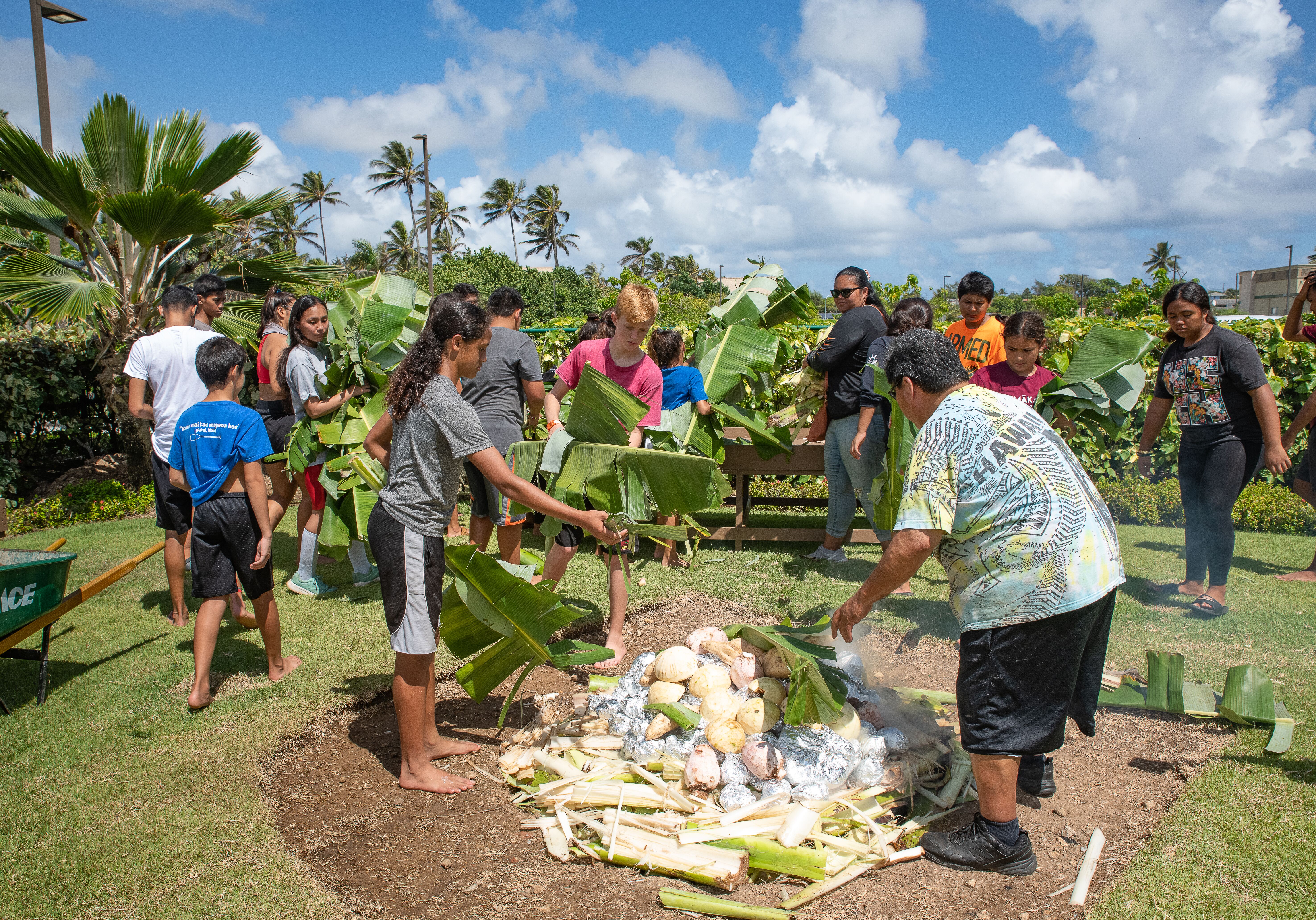 An imu workshop at the Courtyard 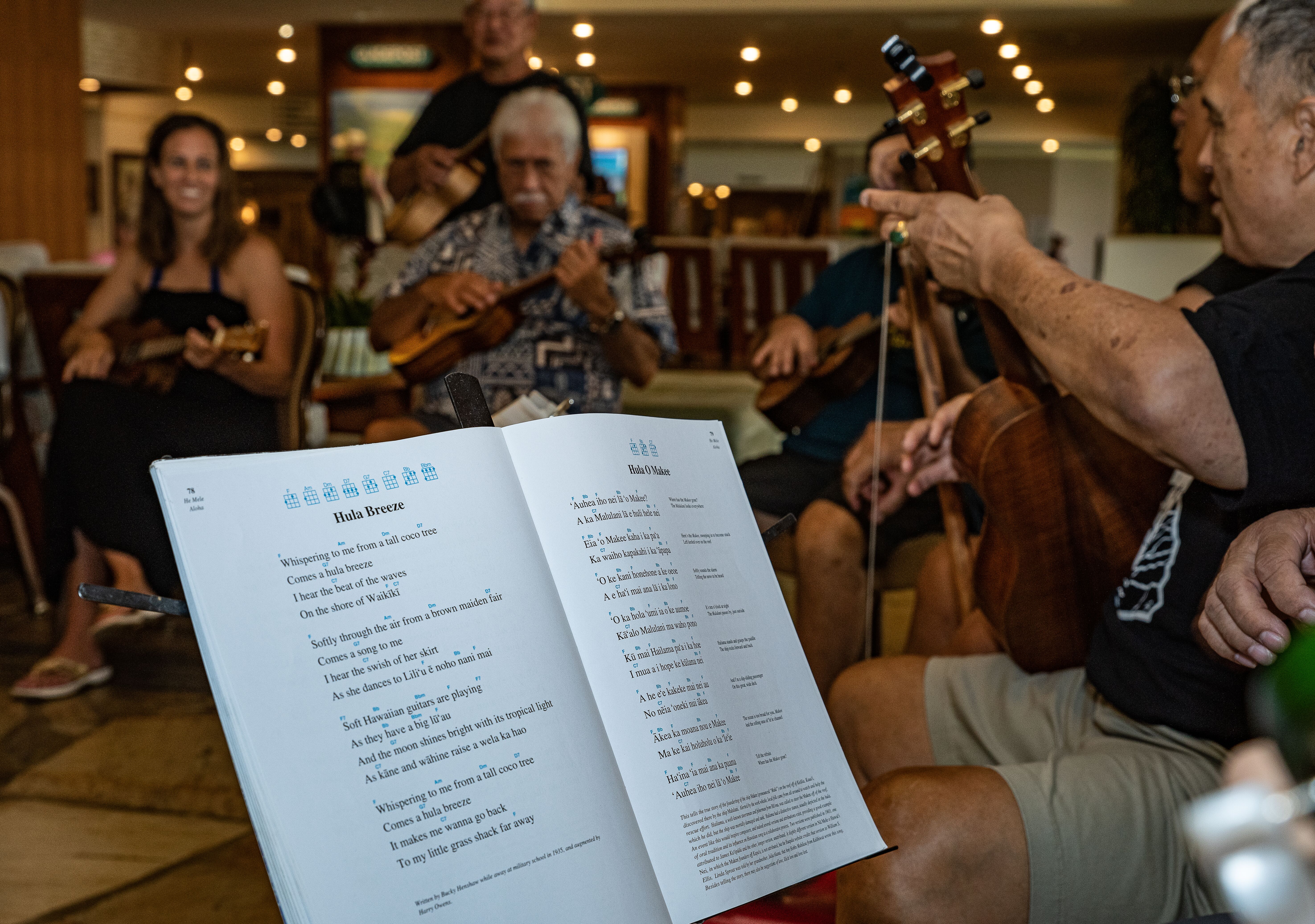 Ukulele enthusiasts gather for a kanikapila at Turtle Bay

We are looking forward to the 30th annual Moanikeala Festival next year. Hope to see you there.

Story and photos by Mike Foley, who has been associated with the Polynesian Cultural Center for over 50 years. He had a long career in marketing communications, PR, journalism and university education before becoming a full-time freelance writer and digital media specialist in 2002. Foley learned to speak fluent Samoan as a Latter-day Saint missionary before moving to Laie in 1967, and he still does. He has traveled extensively over the years throughout Polynesia, other Pacific islands and Asia. Though nearly retired now, Foley continues to contribute to PCC and a select few other media. Almost 50 years ago he married one of Aunty Sally’s hula dancers.