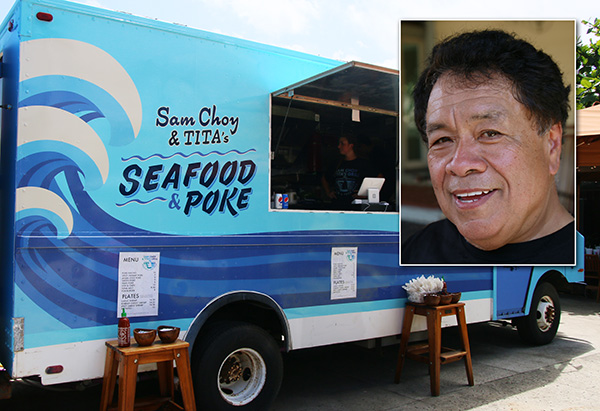 Famous Hawaiian chef Sam Choy, who was born and raised right here in Laie, has partnered with Junior and Almira Ah You in opening Sam Choy & Tita’s Seafood & Poke food truck on March 11, 2017, in the Polynesian Cultural Center’s Hukilau Marketplace. The opening helped mark the second anniversary of the popular marketplace.

The new seafood truck is parked next to Tita’s Grill, which the extended Ah You family operates in the roulotte or food truck court.

“The food world is really exciting. My company has 24 food trucks and restaurants in Seattle, and we’re just getting ready to open in New Zealand, Australia and South Africa,” said Choy, who has lived in Kona for quite a few years and previously operated several of his own restaurants in Hawaii.

“Our truck operation at the PCC is really neat. We can deliver some really great food. Poke is pretty much the hottest food in America right now. It’s found coast-to-coast and internationally, but it’s truly a dish from Hawaii,” Choy said. He explained the Hawaiian word poke refers to the small, chopped pieces of raw fish that are usually served with spices and other condiments.

“We prepare ours in our new truck here, along with other dishes including ahi katsu [tuna flavored with a Japanese sauce] and fish and chips,” Choy continued. “We serve some especially nice island fish, using nothing but the freshest of ingredients.” 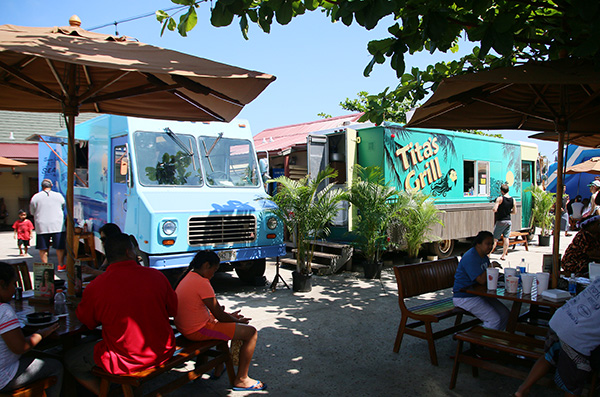 The Ah You’s and Choy have known each other since “little-kid time.” Choy’s parents operated the local-style mom-and-pop Laie Cash & Carry store — popularly known as Sam’s Store, and at one time had a plate lunch business where one of Choy’s relatives now runs the Hukilau Café. Junior Ah You graduated from Kahuku High in 1969, a year before Choy, who went to New York and started gaining serious attention for his cooking skills in the early 1980s.

Ah You family spokesman Kingsley Ah You said, “Dad and Uncle Sam have always loved and respected each other, and we felt this would be a great time for Uncle Sam to ‘come home’ right here at the Hukilau Marketplace.”

Choy agreed: “Laie is very special to me,” he said. “You cannot beat Laie. As much as I travel, I bump into people who either come from here or went to school here. We’ve been like family and friends forever. Laie is magical, and I’m glad to be at the Polynesian Cultural Center.”

“He also has a great love for those who have gone on before, and we’re grateful we can unitedly work together as one,” Kingsley Ah You said of Choy. “We’re lucky to be able to partner with him, and we’re grateful for the Center: Their ‘surf and turf’ concept in the food court is reflected in our menus as well as the blue ocean and green grass looks of the poke and grill trucks, respectively.”

Local Hawaii chef Loren Holly, who worked at the Center as a high school student, was also a former BYU–Hawaii chef, and now operates his own catering business, will help oversee the seafood operation. 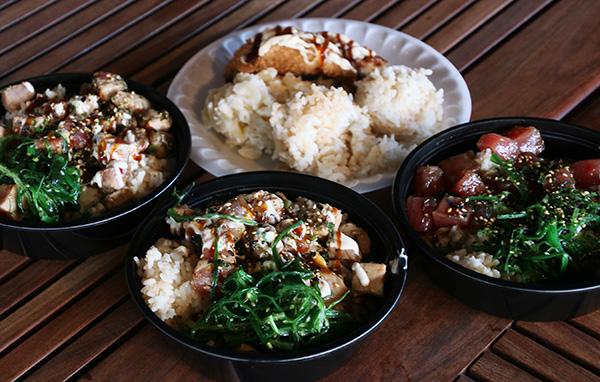 Asked what’s a good way for someone not familiar with poke to try it, Holly suggested, “If you’re not into raw fish, try the seared poke, which is slightly cooked on the outside and raw inside, served on a bed of rice.”

“I’ve had a lot of spicy poke around the islands, and if you like spicy foods I think the one we’ve created here is one of the best I’ve tasted,” he continued. “I commend chef Sam Choy. I think people will enjoy our poke.”

One local guest, who had just purchased a shoyu poke bowl, agreed: “It came with the shoyu poke on top of white rice. It also had a seafood salad, with edamame [young soy beans] and sesame seeds inside, and it was very delicious.”

Mike Foley, who has worked off-and-on at the Polynesian Cultural Center since 1968,  has been a full-time freelance writer and digital media specialist since 2002, and had a long career in marketing communications and PR before that. He learned to speak fluent Samoan as a Mormon missionary before moving to Laie in 1967 — still does, and he has traveled extensively over the years throughout Polynesia and other Pacific islands. Foley is mostly retired now, but continues to contribute to various PCC and other media.