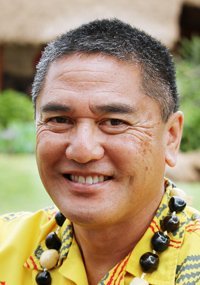 Next to aloha and Hawaii, perhaps no other Hawaiian word conjures more imagery of our beautiful islands and friendly people than hula. Kaipo Manoa, our Hawaiian Village manager or “chief,” explains more about our popular dance form.

“For many centuries past, our ancient dance form which we call hula kahiko, was learned and practiced almost entirely by men,” he said. “We continue to enjoy hula kahiko, which today is performed by both men and women, and is accompanied by drums, other Hawaiian percussion instruments, chants and vigorous motions — but not music.

Manoa continued to explain many people today think of hula as what we call hula auana — the modern form of the dance that has evolved into graceful and colorful expressions of aloha performed by men, women, children and even kūpuna or elders. Hula auana dancers are often adorned with leis and other flowers, and dance to beautiful Hawaiian music. Many thousands of people around the world study hula auana. This is especially true in Hawaii, where keiki (kids) as young as 2-3 are learning how to hula. 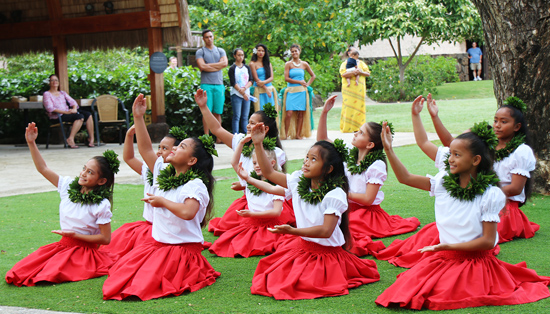 This was not always the case. When the Polynesian Cultural Center was preparing to open over 50 years ago, hundreds of college-age students at the Church College of Hawaii next door (which became BYU-Hawaii in 1974) had begun preparing to perform. 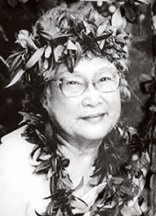 Aunty Sally Moanikeala Wood Naluai, a talented Hawaiian woman, became the PCC’s first kumu hula or teacher — a position she held until 1980, when she retired. However, she continued to consult for the Center until she passed away in 2000.

“I was around 13 years old in 1963 when Aunty Sally, my blood aunt, was asked to come out here and teach hula to all the college students who were dancing in the night show. I was still in high school, but she would use me as an alaka’i — a leader — to help her teach,” recalled Aunty Sunday Kekuaokalani Mariteragi, who with Aunty Sally’s urgings started her own hālau [school of knowledge] in Laie in 1981.

By 1983 Mariteragi was bringing her haumāna [students] to practice at the PCC so visitors could watch them learn hula; and in 1990, she championed establishing the Moanikeala Hula Festival at the Polynesian Cultural Center to honor her aunt. The event is now in its 25th year. 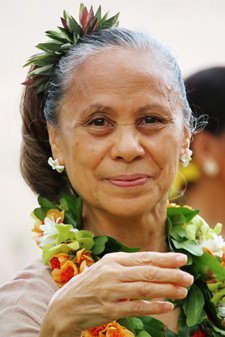 Mariteragi retired in 2012 after 42 years of working at nearby Kahuku High School as a P.E. teacher and student activities coordinator, “but I’m still here at PCC teaching hula to my haumāna, including my own grandchildren,” Mariteragi said. She quickly added she also considers all of her students and their parents as “my family. In fact, many of them are current PCC performers putting themselves through school. It’s an awesome thing to see the young people grow up and move forward in their lives.”

“I want to thank the Hawaiian Village and Kaipo Manoa as well as my sister, Ellen Gay Dela Rosa, for ho’omau — continuing on — with this event in honor of Aunty Sally. We started in 1990, and I liked being back in the Hawaiian Village this year. It has been so warm and friendly.”

“To anyone interested in learning hula, I would say come, learn and enjoy. Whoever your teacher is, do exactly what they want you to do, and you’ll go far.” 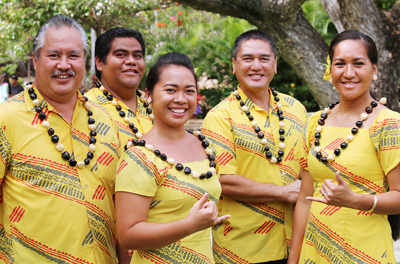 Some of the Hawaiian Villagers at the Polynesian Cultural Center

“There’s a special spirit of aloha here in the Hawaiian Village,” Manoa said. “We know when they come here, our guests feel it. We’re delighted to share a little bit of our aloha with them.” 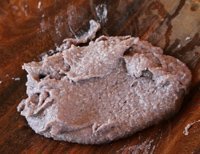 One of the adventurous things you can do in our Hawaiian Village is sample freshly pounded poi — you’ve got to try it!

Poi is made by mashing the boiled or baked underground corm of the taro plant, which Hawaiians call kalo, and gradually mixing it with a little fresh water. To this day, traditional Hawaiians use a stone poi pounder and a carved wooden board to produce poi.
This starchy staple is loaded with vitamins and minerals, and was even used as an early, solid baby food for infants. Also, ancient Hawaiians discovered long ago that pasty poi could be preserved for much longer periods than plain cooked kalo.

Kaipo Manoa, our Hawaiian Village manager, says the poi tasting demonstration is one of the most popular parts for our guests to experience. 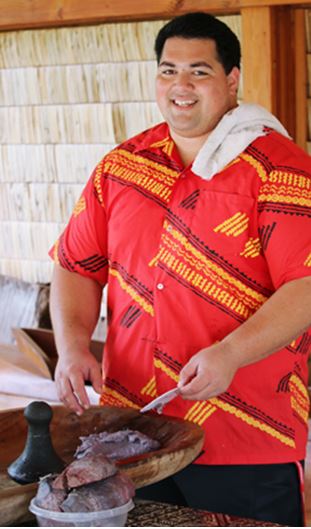 Pound & take away your own poi: He explained the Hawaiian villagers make about two pounds of poi a day. “In the near future, however, we’re going to start letting guests pound their own poi, and when they’re finished, they get to eat it or take it with them. We tried this last year as part of our Lei Day celebration [on or near May 1], and it was a huge hit. I hadn’t seen so many people eating poi before in the village.

“Of course, I’m talking about pounding fresh poi, but for me, it depends on what I’m eating. If it’s poke [spiced-and-sliced raw fish], I like to eat it with fresh poi. If it’s dried ‘ōpelu [mackerel], I’ve got to have two-day-old sour poi with it

PCC’s Hawaiian cultural ambassador Naauao Panee also explained, “Our poi is made fresh every day. We pound it ourselves, so it’s a little different than what you get in restaurants and stores.”

Of course, to each his or her own, especially when it comes to poi. For example, some people like to add salt, some put in sugar. Some mix in cream. Some people use a spoon to dip it, while others dig in Hawaiian style — with their fingers: One-finger poi is very thick and pasty, while thinner, smoother poi requires two- and three-fingers to scoop it up.

Then there’s the whole aging thing: As Manoa suggested, poi begins to develop a bit of a kick after it’s sat for a day or two, so you’ll hear Hawaiians talk about eating one-day and two-day-old poi. One lady even said she had an older relative on the Big Island of Hawaii who would let his poi sit for seven days before eating it, until it started to bubble — but that’s definitely an acquired taste.

Okay, now that you know more about poi, you gotta’ come try some of the fresh kind in the PCC’s Hawaiian Village.

Story and pictures by Mike Foley