JERI GALEA’I: An inspiring story of family, dedication and natural talent in the world of Fireknife Dancing

QUOTE: “The Galea’i (pronounced Nga’-lay–ah-ee) family is a fireknife dynasty. If you’re born into the Galea’i family you have no choice, you’re going to fireknife dance.” Tagaloatoaoa Delsa Moe (from “JERI”, Episode 1) 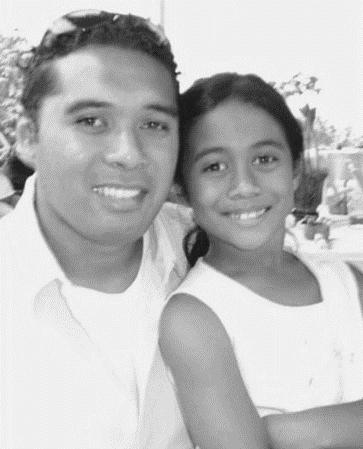 David Galea’i and his daughter, Jeri, around 2007

I’ve watched Jeralee (Jeri) Galea’i since she was a 12-year-old girl trying to break into the male dominated sport of Fireknife Dancing. I’ve become a great fan through the years, watching her skill and confidence increase. Clearly, this is a woman of dedication. The number of hours spent in practice is almost unimaginable, but her dedication to her family, her fellow competitors and the stunning artistry of the dance is where her real passion lies. And at the base of all of this is her father, David Galea’i. Talking to either of them reveals a level of respect, a deep bond, that would be the envy of any family. It’s a beautiful story filled with sacrifice, grit and love, all captured in “JERI”, a documentary by Tay Steele and produced by the Polynesian Cultural Center, which will be featured at this year’s We Are Samoa event, sponsored by the Center.

This modern artistic interpretation of ancient Samoan warfare starts with a knife, called a nifo ‘oti, which was originally performed as a display of victory in warfare (without fire). Eventually fire was added to emphasize the movements and to increase the skills and thrills of the art.

The question arises, are the competitors dancing or is it the knife itself that dances? The answer may be both with both the dancer and the knife performing spins, kicks, and agile flips so graceful and yet powerful that it takes a while for what’s happening to sink in. Wait, did that twirling ball of flame just leap 10 feet in the air? Hold on, am I actually seeing THREE knives spinning overhead, lit on both ends and hooked together. For a mainland gal like me, it took years to really understand the massive amount of talent it takes to excel at this sport, much less just to keep from chopping off a finger or toe (more on that later). 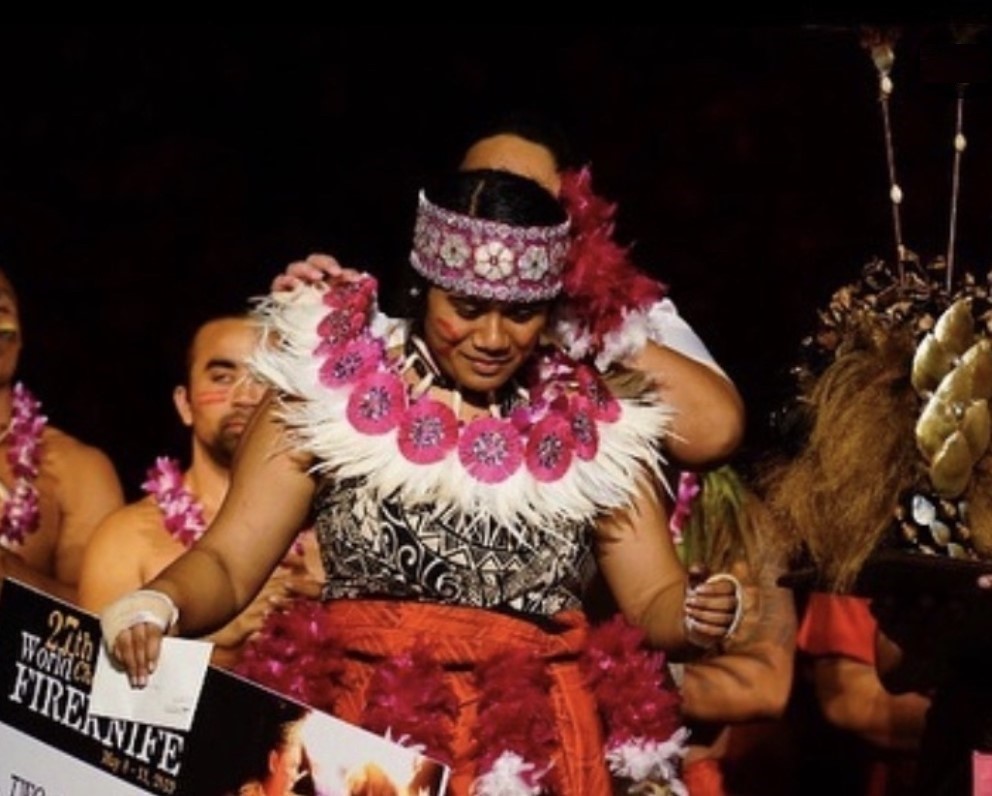 But let’s get back to Jeri Galea’i, the reigning Queen of the competition who secured the coveted title of Women’s Champion during the 2019 World Fireknife Competition. Here we are, 3 years later.  Jeri is now 21 years old and on the day we met, she had just finished her last final at Brigham Young University Hawaii. She ran over to meet me with a happy smile that looked like 50% relief and 50% accomplishment. Being that she is single and now officially free from the constraints of school schedules, she is looking forward to a little travel.

But before she goes, there just happens to be this little event coming up in May called the 29th Annual World Fireknife Competition. This year will be the first time since she was 12 that she is NOT going to be competing. Instead, she will be front and center of a special screening of “JERI”, a three-part documentary showcasing this humble woman who just so happens to be one of the most dynamic and popular competitors in the World Fireknife Competition, a yearly event held each May at the Polynesian Cultural Center in Laie, HI. (See Schedule of Events information at the bottom of this article for more information.)

The Polynesian Cultural Center is proud to share this unique story showcasing the talents and humble demeanor of this inspiring young warrior.

QUOTE: “I didn’t even have to teach her much to get those basics down. I saw her spin. It was a natural spin. I knew that if I didn’t throw her in the fire and … start training her, at that time, then I was going to miss out on the opportunity,” David Galea’i, father, coach and 3-time World Fireknife champion (from “JERI”, Episode 1) 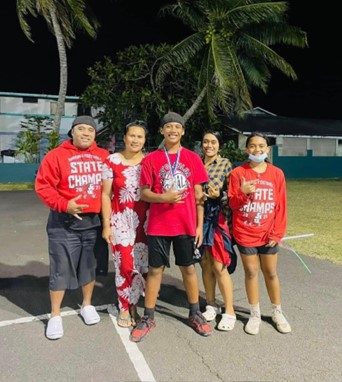 Nina: What’s it like to be from a fireknife dynasty family where it’s just expected. Did you always think you’d take up the family ‘hobby’?

Jeri: At one point, growing, I didn’t really look at fireknife dancing as something I’d do. But when I moved here from the Cook Islands, I was 5 years old. My dad was actually teaching my older cousins and that’s when I started to pick it up. He saw potential. That’s when he started working on my craft and I just grew to love it.

It makes me feel very proud, coming from a family that does fireknife. It just makes me want to continue the tradition for the future generation.

Jeri being interviewed for the documentary

Nina: What was the experience like of having a movie made of you?

Jeri: First off, I was just very grateful for the opportunity. I was never actually involved in a film like that. It took up a lot of time – it took about a year (off and on). It was an experience, for sure. Watching it makes me proud…and grateful for Tay Steele, the videographer. Shout out to him. He’s very talented. 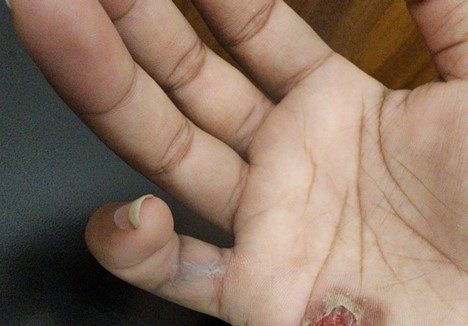 New and old injuries are a constant in Fireknife

Nina: When you first picked up the fireknife, did you have a lot of injuries at first?

Jeri: Still to this day I get burns and injuries. Just last week I burnt myself. And this pinky doesn’t straighten. The blade went into my pinky. I can no longer straighten it. I think this is my worst injury. It’s normal to get cuts. 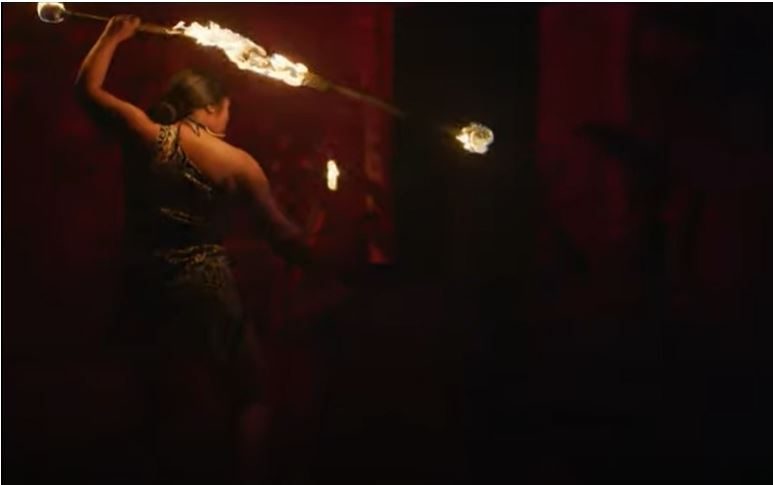 Nina: Are there any experiences that stand out in your mind?

Jeri: I first performed at 11 years old with my cousins at Laie Park. That was an experience. I burnt my hair. It was so scary. But also, it was fun…it was fun.

The first year I competed at World Fireknife, I only did singles (one knife). About halfway through the routine my knife broke and the whole blade just flipped off. Going in for the first time and having that happen, I was so embarrassed.

I have enough experience now to know that you can be doing the same exact routine but things like this just happen. For instance, I remember a guy (performing at the luau) at Hale Aloha who threw his knife up and it (flew) straight into the lagoon. He just bowed and walked off (laughs).

I know I’m not fully done. I just figured that I would take a break. I’ve been here all my life. I’ve been competing year after year. I am hoping to move to Utah or back to the Cook Islands to visit my grandparents.

Introducing the women competitors in 2019

Nina: As a woman, was it hard to enter this type of competition against the guys?

Jeri: To be honest, when I first competed, I was very young. I was not trying to win, but simply to gain experience. When I got older, into Junior Division, I was competing every year. Going in was intimidating, not because it was harder. It was just different. Mostly it’s the guys competing, and I just wanted to prove myself. I still had fun, but at the same time [I was trying] to win the title and make a name for myself. 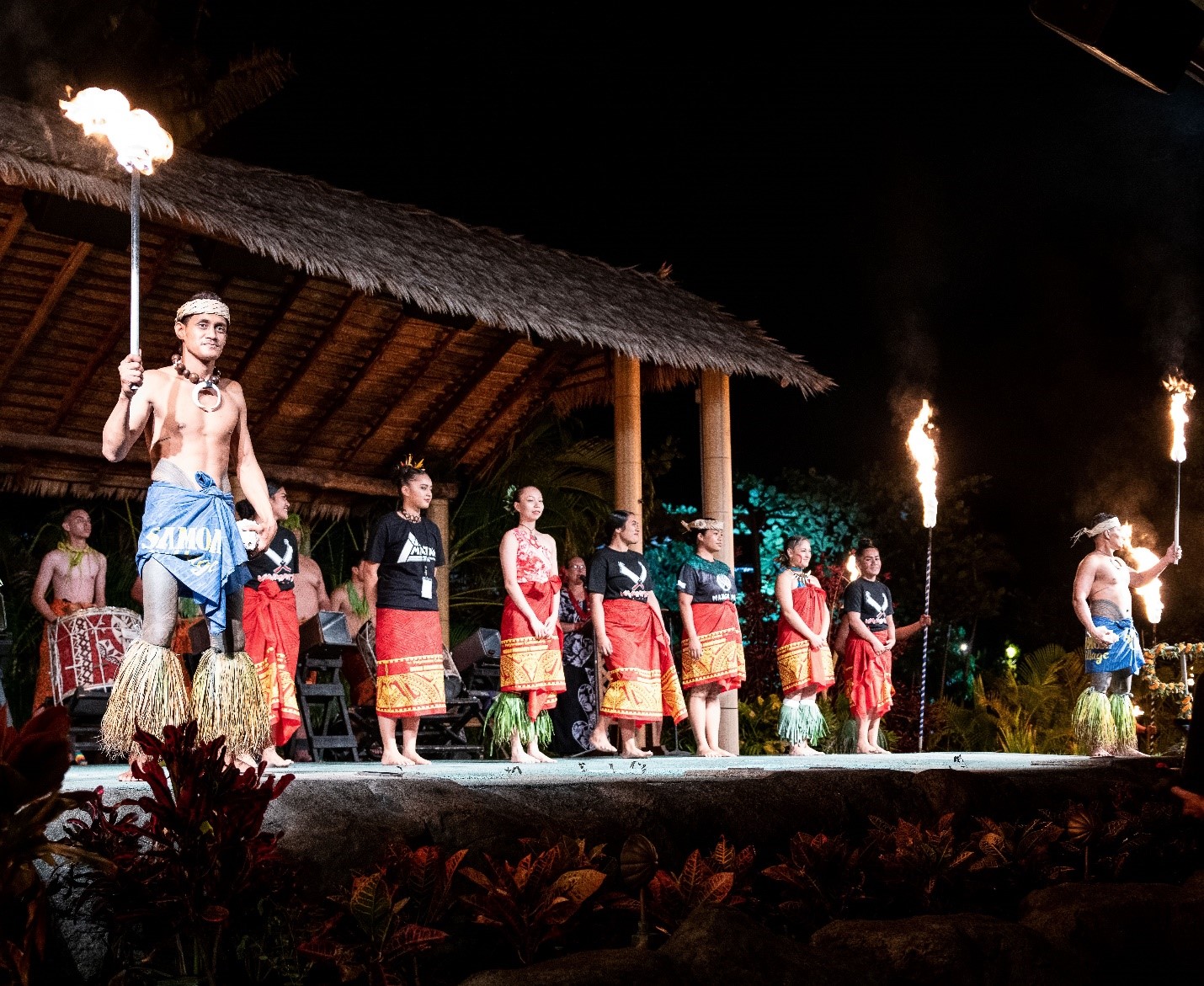 The 2019 Women’s Competitors are introduced to the judges.

Nina: What is the hardest part of a fireknife competition?

Jeri: It’s not really spinning the knife, it’s dealing with the adrenaline, dealing with the pressure. That’s probably the hardest thing for me. When you go out onto the stage, the adrenaline is running, and it can throw you off. People can take that for granted, but you have to learn to handle it. I still get nervous before performing but with experience you learn how to handle it.

I always tell the kids that I teach to ‘stay humble no matter what level you’re at’. That will keep you sane and make you want to learn more. If you’re not a humble person, you’re not going to listen to advice. I learned that from my dad. My dad is very humble. 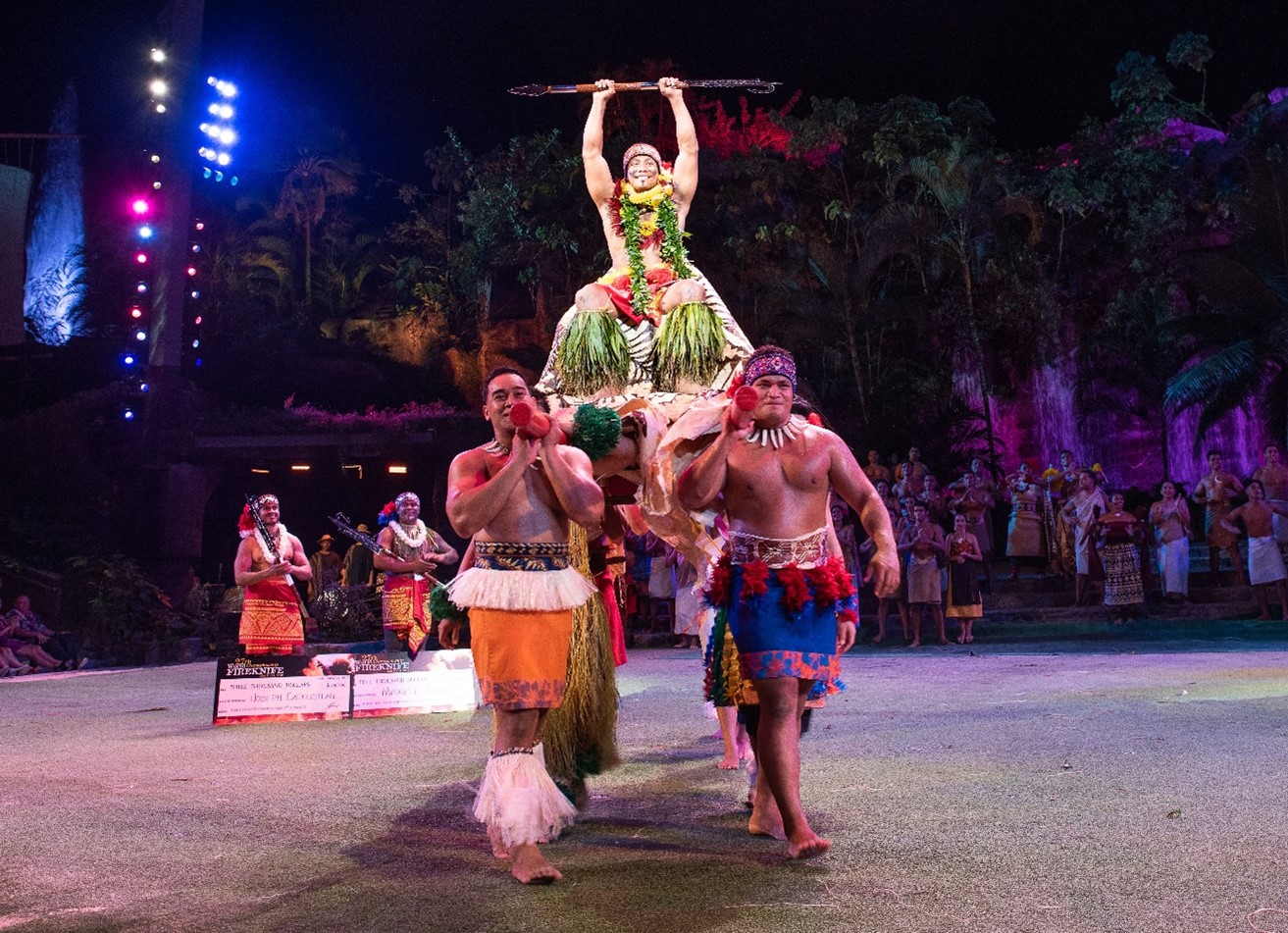 Falaniko Penesa, World Champion of the 2019 World Fireknife Championship, is lifted by his fellow dancers in celebration.

Nina: I’m always impressed with the competitors. Whether they come in first, second, or don’t place at all, they seem genuinely happy for the other competitors. They’re really great about supporting one another, and it seems like such a humble competition.

Jeri: We all come from different fireknife schools, different places, but when it comes to competition, we do our part onstage but when we come off of the stage, we’re still all family. Everyone is still good with each other. 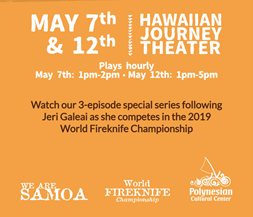 Viewing time for the JERI documentary are listed above

To learn more about Jeri’s story, view the 3-part documentary “JERI” on our YouTube channel.

For a more immersive experience, attend the “JERI” film festival being held during the World Fireknife festivities, a part of the We Are Samoa annual event (see below).

Want to experience the thrill of fireknife dancing? Tickets are now available for this year’s World Fireknife Competition. 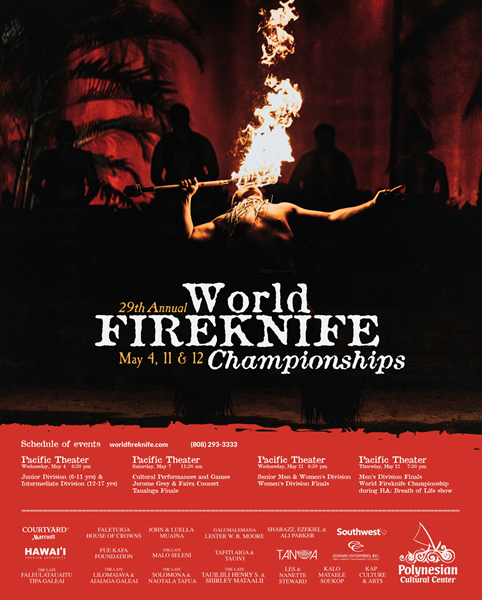