The Maori whare tupuna or ancestral meeting house that dominates the Aotearoa Village is perhaps the most symbolic structure in the entire Polynesian Cultural Center. 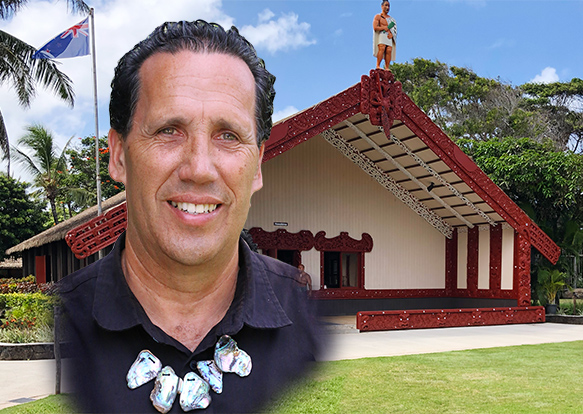 ■ “Each ancestral meeting house, in the main, is named after a significant common ancestor of that particular tribal area. That’s where you want to start from. These buildings memorialize great leaders. Their descendants down through the generations are portrayed in carvings both inside and outside of the house, along with their histories, genealogies and mythologies surrounding their lives.”

■ “Our whare tupuna here is named Hawaikiroa, who was a common ancestor to the Polynesian people.”

■ “The building actually takes on and portrays the physical anatomy of a human.”

■ “For example, the apex of the house represents the head. You can see the eyes, nose, mouth and tongue.”

■ “The shoulders and arms are the maihi or bargeboards and they represent the outstretched arms of the ancestor.”

■ “At the end of the arms at the edges of the house are the raparapa which represent the hands and the fingers.”

■ “Together, the outstretched arms and hands symbolize welcoming visitors into the house.”

■ “There’s also a tahuhu or ridgepole running the length of each house. Typically painted these days, it represents the backbone or spine of the ancestor.”

■  “And the heke or rafters coming down from the ‘spine’ represent the rib cage.” Makekau pointed out the Maori word raaraa actually means ribs, but heke also means ‘to descend,’ so the symbols portrayed there are koru referring to new life regenerated. They represent the genealogical descent lines that come from the common ancestor down through the generations to the carved figures.”

“Their oral histories were maintained, especially if they were ranking figures,” Makekau continued. “There would be people who knew the genealogies, and often times these genealogies were used to maintain peaceful relationships with other people, simply because we were usually related. Why should we try to kill each other? Let’s find peaceful solutions. A connection through genealogy brings a sense of unity and belonging.”

Makekau also explained that the Polynesian Cultural Center’s whare tupuna is especially significant because it is only one-of-five such carved meeting houses that currently located outside of New Zealand.

For example, Hawaikiroa and the smaller Kupe house on the side have been in Laie since they were put up in August 1963. “They were shipped over from New Zealand and assembled here in preparation for the opening of the PCC in October that year.”

He said the other three are located in the Field Museum in Chicago; in Surrey, England; and in the Museum of Technology in Hamburg, Germany. “There was another one that was in Australia, but it’s now back in New Zealand.”

So, the next time you visit the Aotearoa Village at the Polynesian Cultural Center, take a closer look at the unique details that are such an important part of our whare tupuna.

Story and photo by Mike Foley, who has been a full-time freelance writer and digital media specialist since 2002. Prior to then, he had a long career in marketing communications, PR, journalism and university education. The Polynesian Cultural Center has used his photos for promotional purposes since the early 1970s. Foley learned to speak fluent Samoan as a Latter-day Saint missionary before moving to Laie in 1967, and he still does. He has traveled extensively over the years throughout Polynesia, other Pacific islands and Asia. Though nearly retired now, Foley continues to contribute to PCC and other media.