(Historical note: The same volcano-like backdrop still rises above the Hale Aloha today, which is now the main venue for the PCC’s Alii Luau and other special functions.)

Elder Hugh B. Brown, First Counselor in the First Presidency of The Church of Jesus Christ of Latter-day Saints, which founded both BYU–Hawaii and the Center, came from Salt Lake City, Utah, to preside and offer the dedicatory prayer. 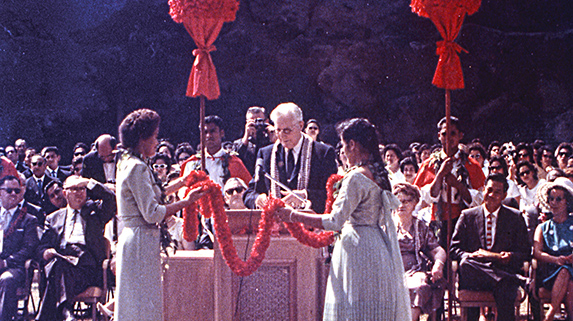 Elder Hugh B. Brown of the First Presidency of The Church of Jesus Christ of Latter-day Saints prepares to dedicate the Polynesian Cultural Center on October 12, 1963.

Te Aroha Nui, a group of 144 Maori volunteers — some of them former Latter-day Saint building missionaries — came from New Zealand at their own expense several weeks earlier to help put the finishing touches on the Center. They stayed to provide incomparable music for the dedicatory program and a spectacular opening to the Aotearoa Village.

A pattern of alumni reunions begins

The cumulative number of visitors climbed into the millions as the years passed, making the Polynesian Cultural Center one of the most popular attractions in Hawaii. The cumulative total of employees also grew into the thousands. The majority of them, as it is to this day, were full-time students at the adjacent Brigham Young University–Hawaii. Typically while enrolled, they worked part-time at the PCC and moved on when they graduated.

Many of them met their future spouses while working at the Polynesian Cultural Center. Generations of alumni children have also come to Laie to attend BYUH and, of course, work at the PCC.

But an interesting dynamic began as early as 1983 with the PCC’s 20th anniversary: PCC management started to include alumni reunions as part of the celebrations . . . and we discovered our alumni would return to Laie, Hawaii, from all over the world to rekindle the spirit of aloha they enjoyed as young employees. Special alumni evening shows soon became highlight events. 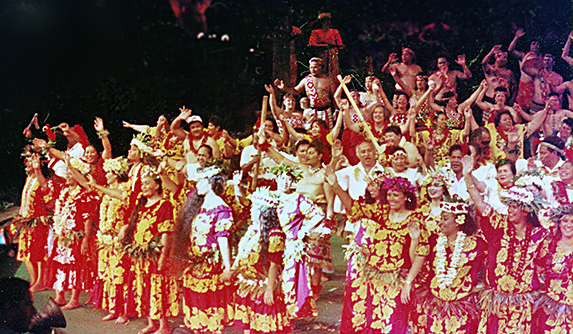 The “cast” of the Polynesian Cultural Center 40th anniversary alumni evening show in 2003.

Our week-long golden anniversary reunion in 2013 was our biggest ever. The Center began several years in advance to plan special activities on each day from September 1-8: For example, here’s a partial list of events:

Enjoy a few more pictures of the various events:

The finale of the “gold” alumni show

“Fifty-five years ago, the Polynesian Cultural Center embarked on a journey our founders envisioned as a uniquely rare opportunity to educate the world about the magnificent people of Polynesia,” said PCC president and CEO Alfred Grace. “We celebrate this anniversary reaffirming our dedication to continually improve how our guests experience Polynesia by engaging with people proud to share their culture and heritage.”

Plan ahead for the 2023 PCC alumni reunion

Yes, the PCC’s golden anniversary in 2013 was truly memorable. Of course, some of the alumni were labor missionaries who worked on the Center before it opened. Others were original PCC performers. Many of those dancing in the 2013 “gold” alumni evening show were white-haired; and some needed extra time to kneel, stand and do their motions.

Some have since passed away, and there will inevitably be fewer of older alumni when the 2023 reunion rolls around; but we believe that celebration will be bigger than ever. Plan on joining us.

Story and most photos by Mike Foley, who has been a full-time freelance writer and digital media specialist since 2002. Prior to then, he had a long career in marketing communications, PR, journalism and university education. The Polynesian Cultural Center has used his photos for promotional purposes since the early 1970s. Foley learned to speak fluent Samoan as a Latter-day Saint missionary before moving to Laie in 1967, and he still does. He has traveled extensively over the years throughout Polynesia, other Pacific islands, and Asia. Though mostly retired now, Foley continues to contribute to PCC and other media.

A late 1960s PCC student employee and later a full-time senior manager, Foley has participated in each PCC alumni reunion since 1983.