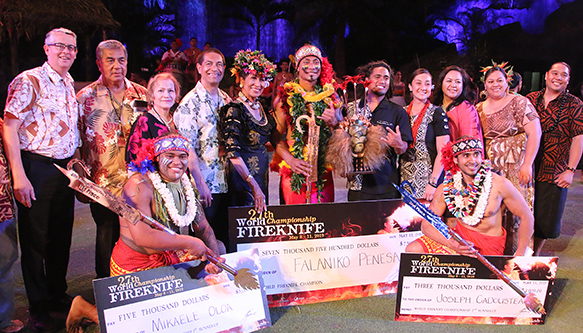 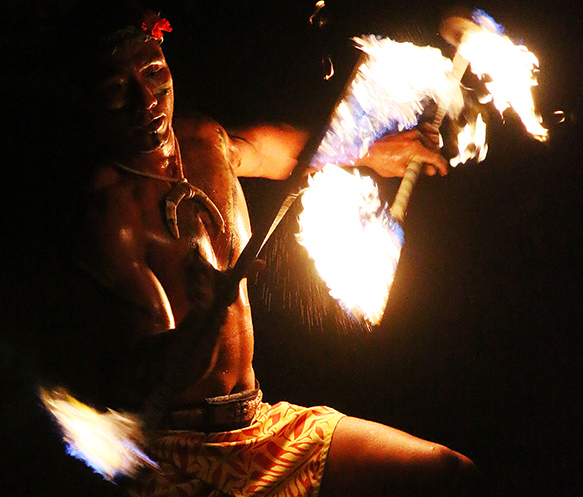 Falaniko Penesa during his championship-winning performance at the Polynesian Cultural Center on May 11, 2019.

A panel of judges selected Falaniko Penesa of Puipa’a, Upolu, Samoa, as the 2019 World Fireknife champion. The finalists competed on May 11 during a sold-out performance of the Polynesian Cultural Center’s famous HA: Breath of Life evening show. 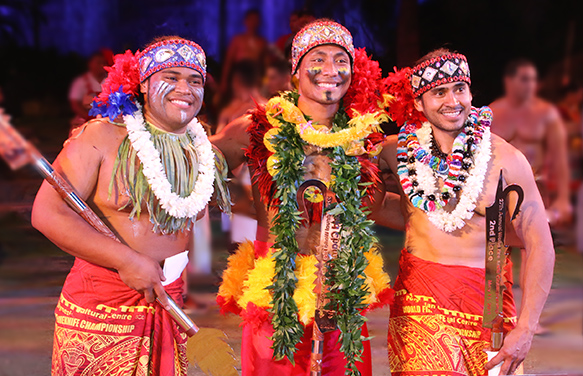 “This was the first time we had a true battle of the champions at the end. All three of the finalists were former champions,” said Tagaloataoa Delsa Atoa Moe, PCC vice president of cultural presentations 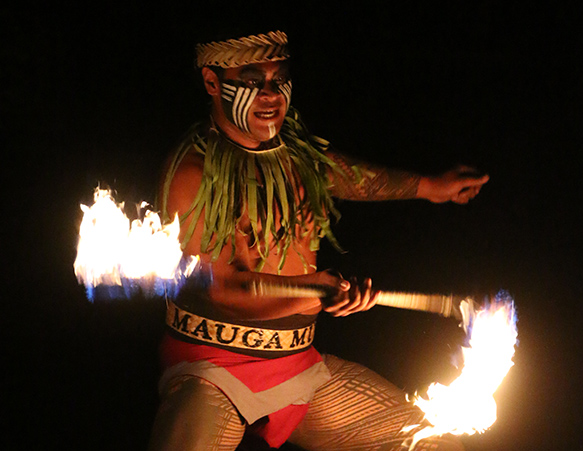 Penesa — who previously won in 2017 — is a native Samoan and has been performing at Disneyland Hong Kong for the past seven years. With this new title, he claimed a $7,500 prize, a large hand-carved trophy knife, and other Samoan cultural gifts from the sponsors. “The thing I like the most here is the people,” he said. “All the competitors help each other, and I can see the culture is still alive here.”

Cadousteau — who won the top title in 2012, 2013 and 2015 — was awarded 2nd runner up. He received a $3,000 cash award, a hand-carved trophy knife and other Samoan cultural gifts. Another Disneyland Hong Kong alumnus, Cadousteau said he and his wife now run a family-owned hotel. He greatly enjoys coming to the PCC and expressed appreciation for the feelings of brotherhood and camaraderie among all of the contestants. 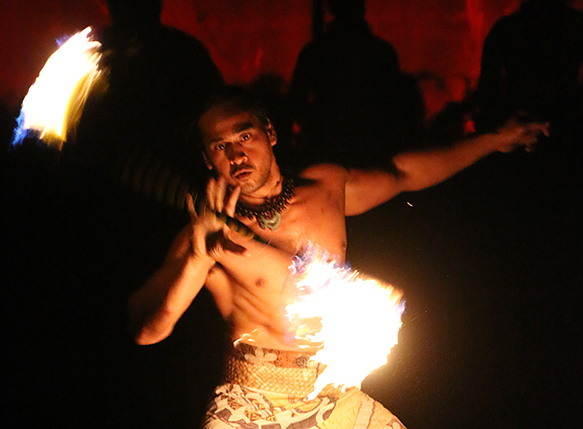 The three finalists advanced from a field of 24 entrants in the first round of the men’s open division competition on the evening of May 9 in the PCC’s Hale Aloha venue. Following several hours of absolutely thrilling Samoan knife dancing, a panel of judges selected six semi-finalists — the three finalists as well as (in no particular order): Seiuli Matuni Vaiaoga and Jako Pupualii, both of Orlando Florida; and Yuya Matsushima from Fukushima, Japan.

In announcing the results, PCC co-emcee and islands cultural director Matuauto Steve Laulu quoted one of the judges, who said, “They make hard things look easy.”

Winners announced during the next day’s competition

The next evening’s competition on May 10 in the Hale Aloha included the junior (ages 6-11) and intermediate (ages 12-17) division competitions, plus the women’s open division finals. PCC emcees Laulu and Moe then announced the respective winners.

The six semifinalists then held their run-off competition, with the three finalists named at evening’s end, while the others each received a $500 consolation prize.

“This was a historical final,” Moe said. “I knew the competition was going to be tough. They did not make it easy for the judges. Any one of those three could have won.”

Moe pointed out the PCC’s 2019 World Fireknife Championships event also featured a “very international group of finalists: One from Hawaii, one representing Tahiti and one from Samoa.”

She also noted that a social media post from that evening showed almost all the former champions were onstage after the final. “That gave me goosebumps. Every year former champions come to give encouragement to the ones vying for the current title. Some of them went backstage to give encouragement to the three finalists and help however they could.”

“There was no envy, no rivalry. It’s a real brotherhood. They were also there to welcome the next winner, whoever it is.”

And a FA’AFETAI TELE (big thanks) to: 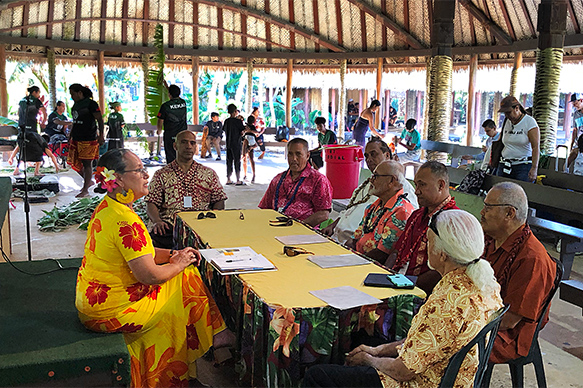 Read about the Polynesian Cultural Center’s 2019 We Are Samoa festival.

Story and photos by Mike Foley, who has been a full-time freelance writer and digital media specialist since 2002. Prior to then, he had a long career in marketing communications, PR, journalism and university education. The Polynesian Cultural Center began using his photos for promotional purposes in the early 1970s. Foley learned to speak fluent Samoan as a Latter-day Saint missionary before moving to Laie in 1967, and he still does. He has traveled extensively over the years throughout Polynesia, other Pacific islands and Asia. Though nearly retired now, Foley continues to contribute to PCC and other media.