PFHOF Announces Its Class of 2017 Inductees

■  And the late John Manumaleuna (Samoan) as a contributor: Founder of Samoan Athletes in Action.

Local boys Ah You and Naeole: Ah You, who along with his family operates Tita’s Grill in the Hukilau Marketplace, grew up in Laie, performed at the old Laie Hukilau and also worked at the PCC in its earliest days. 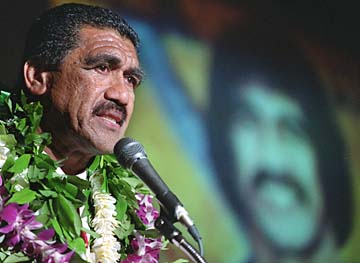 20000208 SPT – With tears streaming down his face former Canadian Football league player and local prep star Junior Ah You thanks his family, coaches and God for his induction into the Hawaii Sports Hall of Fame on Tuesday night. SB photo by George F. Lee

After Ah You graduated from Kahuku High and left Laie to attend Arizona State on a full-ride football scholarship, he continued to share his Polynesian performing skills by putting on luaus and shows throughout the Intermountain West. After graduating, he went on to become a four-time CFL All-Star and two-time Grey Cup champion. He was also named the Grey Cup MVP in 1974.

In addition, Ah You’s jersey, #77, is one of seven retired by the Montreal Alouettes, and he was named one of the CFL’s Top 50 players of the league’s modern era. He is also a member of the CFL Hall of Fame and the Hawaii Sports Hall of Fame. 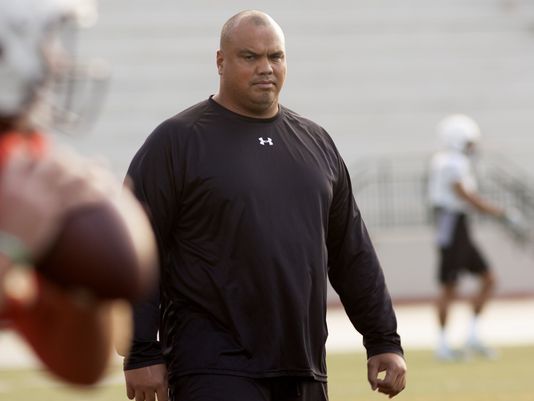 Naeole, who also played football for Kahuku High in the 1970s, grew up in nearby Kaaawa before accepting a full-ride football scholarship to play for the University of Colorado at Boulder.

The Class of 2017 will be honored during the Polynesian Football Hall of Fame Enshrinement Weekend, to be held in January 2017 at the Center — permanent home of the free PFHOF exhibit.

For more information, go to www.PolynesianFootballHOF.org.

The 2017 inductees selection process: The PFHOF selection committee chose the Class of 2017 inductees from an initial list of over 200 possible candidates. Several months ago they winnowed this number to 15 player and three contributor finalists, before naming the inductees.

“On behalf of the Selection Committee, I congratulate this outstanding Class,” said Dick Tomey, committee chairman. “Their accomplishments on and off the field are truly worthy of this recognition.”

The Class of 2017 will be honored during the Polynesian Football Hall of Fame Enshrinement Weekend, to be held on January 21-22, 2017, on Oahu. The Polynesian Pro and College Football Player of Year honorees will be announced later in the year.