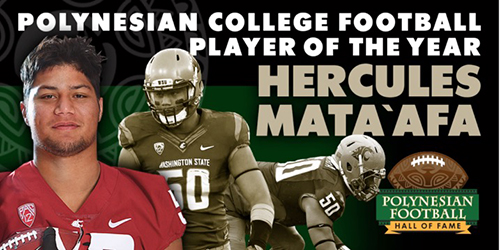 The Polynesian Football Hall of Fame has selected Washington State University Defensive Lineman Hercules Mata’afa as the 2017 recipient of the Polynesian College Football Player of the Year Award.

The Award is presented annually to the most outstanding Polynesian college football player who epitomizes great ability and integrity.

The Associated Press named Mata’afa — a redshirt junior who prepped at Lahainaluna, Maui — its Pac-12 Conference Defensive Player of the Year. The AP also named him its All-American Team, as did the Walter Camp, Sports Illustrated, The Athletic’s, and the FWAA.

Mata’afa was the cornerstone of the Washington State defense, leading the Pac-12 with 21.5 tackles-for-loss and 9.5 sacks.  He started all 12 games for the Cougars while recording 43 tackles with two forced fumbles and a fumble recovery, had multiple tackles-for-loss eight separate times and earned Pac-12 Defensive Player of the Week honors following the Washington State win at Utah.

“On behalf of the Polynesian Football Hall of Fame Board of Directors and Selection Committee, we congratulate Hercules on this historic accomplishment,” said Jesse Sapolu, Chairman and Co-Founder. “He had an outstanding season and truly represents the very best of our Polynesian culture.”

“With more than 500 players of Polynesian ancestry playing Division I football today, the Polynesian College Football Player of the Year Award has become one of the most prestigious awards in college football,” he continued. “On behalf of our Board of Directors, we would like to congratulate each of this year’s finalists.”

The PFHOF will formally present Mata’afa with the Award during the Enshrinement Week celebration dinner in Waikiki on January 19, 2018. He will also be recognized at the enshrinement event at the Polynesian Cultural Center on January 20, 2017, and later that afternoon during the Polynesian Bowl high school all-star football game at Aloha Stadium in Honolulu. 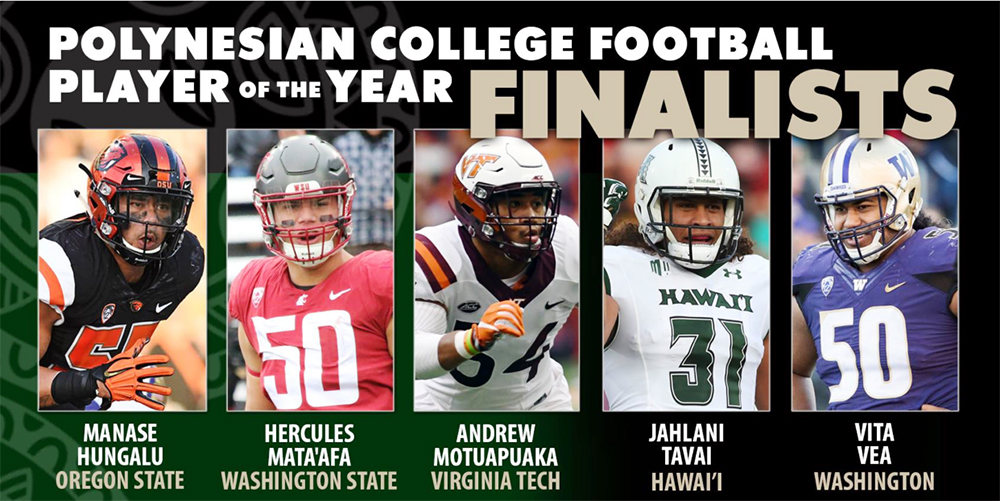 Other 2017 finalists for the PFHOF college player of the year award included:

Manase Hungalu (Tongan) — from Kona and Kealakehe High, Hawaii: A senior LB at Oregon State, he led the Beavers in 2017 with 97 tackles, including six for losses, two-and-a-half sacks, two interceptions, and four pass break ups.

Jahlani Tavai (Samoan) — from California: Junior LB, University of Hawaii: For a second consecutive season, Tavai tallied more than 100 tackles. The California-native had 124 in 2017, including 11 for losses, five-and-a-half sacks, one interception, a forced fumble and a fumble recovery. He ended the year ranked 11th in the country in tackles per game.

Vita Vea (Tongan) — from California: The junior defensive lineman at the University of Washington was selected as a preseason All-American. He recorded 37 tackles and five and a half tackles for loss this year and is a Bednarik Award semifinalist.

St. Louis High School (Honolulu), University of Oregon and Tennessee Titans Quarterback Marcus Mariota was selected as the inaugural recipient of the Award in 2014. Notre Dame and Baltimore Ravens Offensive Lineman Ronnie Stanley was the 2015 recipient, and University of Colorado Quarterback Sefo Liufau received the honor in 2016.

The PFHoF inaugurates the High School Player of the Year Award 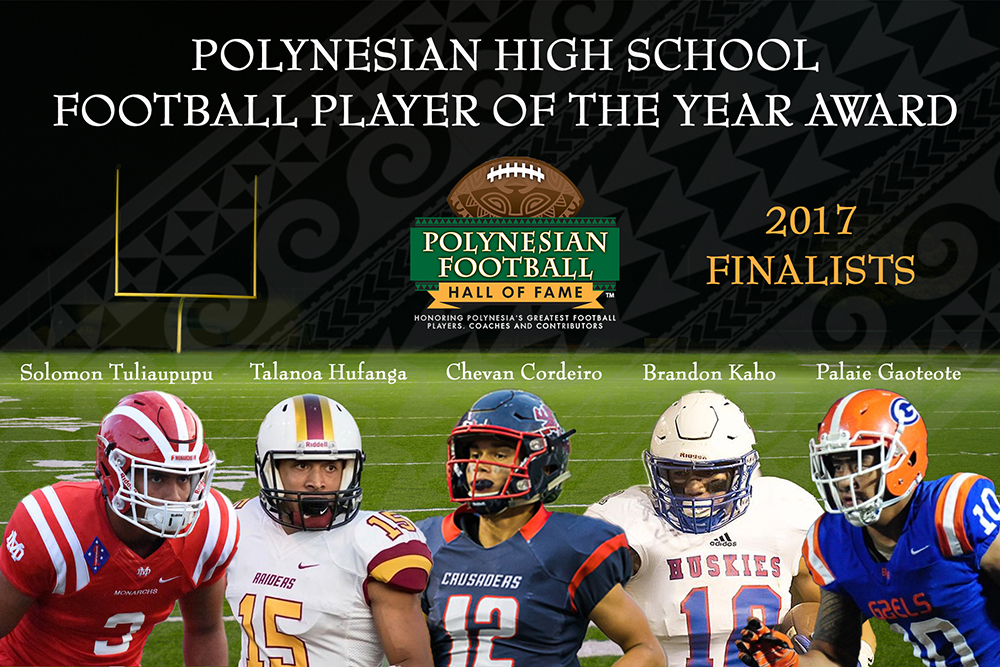 The 2017 PFHOF High School Players of the Year finalists

For the first time this year, the PFHOF has announced five finalists for the inaugural 2017 Polynesian High School Football Player of the Year Award. The five 2017 finalists, selected from a watch list of 50-plus possibles, include:

“The Polynesian influence in football is rapidly expanding and at an all-time high,” said Jesse Sapolu, Chairman and Co-Founder. “This award showcases the immense talent of our Polynesian student-athletes in high school football today.”

The high school player of the year, and all the other inductees, will be recognized at the inaugural Polynesian Bowl, a premier senior high school all-star football game. Featuring the world’s elite players of Polynesian heritage and other ancestries, the game is set for January 20, 2018,  6 p.m. at the Aloha Stadium in Honolulu (tickets required). For more information about the game, visit http://www.polynesianbowl.com/.

About the Polynesian Football Hall of Fame

In addition to Sapolu and Tanuvasa, other PFHOF board members include Troy Polamalu, Vai Sikahema, June Jones and Reno Mahe.

Established in 2013 to honor Polynesia’s greatest players, coaches and contributors, this beautiful gallery showcases the achievements of the inductees and Polynesian football legends with plaques, photos, mementos, an interactive display and a Wall of Honor.

Story by Mike Foley, who has been a full-time freelance writer and digital media specialist since 2002. Prior to that he had a long career in marketing communications, PR, journalism and university education. Foley learned to speak fluent Samoan as a Mormon missionary before moving to Laie in 1967 — and still does. He has traveled extensively over the years throughout Polynesia, other Pacific islands and Asia. Foley is mostly retired now, but continues to contribute to PCC and various other media.

Foley recalls when he first arrived in Samoa in 1965, American “gridiron” football was just starting to draw a little attention. Noting the natural athleticism of the Samoans and their all-in style of playing rugby, however, he couldn’t help thinking, “These guys will be formidable if they ever start playing American football.”