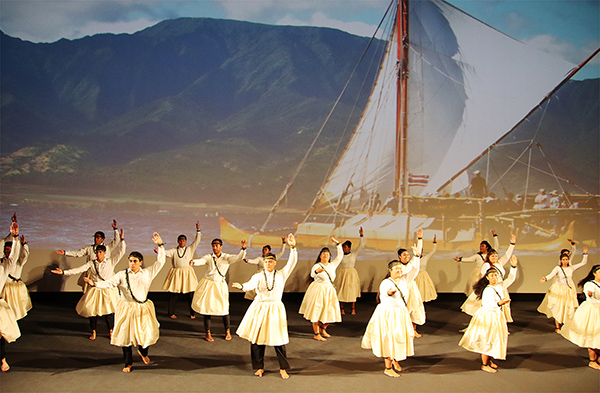 Many people know that hula motions and even entire performances have meaning and tell stories, but they may not realize some of the stories portrayed actually reflect current lives and events.

That’s why Pomaikai Krueger, the Polynesian Cultural Center’s (PCC) kumu hula, or hula master, recently felt inspired to compile and share the performance of A Light On A Hill, as part of the free hour-long hoike, or tribute, of hula and songs.. Krueger performed with members of the PCC’s own Hui Hooulu Aloha halau (a group comprised of employees, BYU–Hawaii students and community members), BYU-Hawaii Hawaiian Club dancers, the Laie-based Hula Halau O Kekela, and others on November 16 and 23, 2019, in the PCC’s Hawaiian Journey Theater.

Krueger explained that the hoike and mele, or songs, “are just a few expressions of devotion” in sharing the history of The Church of Jesus Christ of Latter-day Saints in Hawaii since 1850, in relation to the centennial celebration of the Church’s “beloved Laie Hawaii Temple.”

The Church president dedicated the temple, which is part of the PCC’s optional Laie Tour, on Thanksgiving Day 1919. At the time it was only the Church’s fifth temple in the world, the first outside North America, and at one time it served devout members from throughout Hawaii, the Pacific islands and all of Asia.

Members of the Church have been celebrating the temple centennial throughout 2019.

Krueger’s ties to Laie and hula 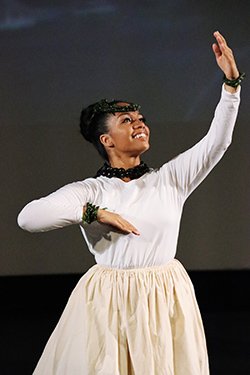 In introducing the program, Krueger said his own Hawaiian kupuna or ancestors “first came to Laie in the late 1700s.” He added he still has ohana, or family members, living in the community. “Some of them were kumu hula, and we continue to teach the art form,” he said.

“In becoming a hula master here, I have very large shoes to fill,” Krueger said, “and I’m very grateful to the people who carried on such a legacy.”

For example, soon after coming to work full-time as the the Center’s kumu, Krueger revived Hui Hooulu Aloha, which was originally formed in 1979. It enjoyed great success in its early years, largely under the direction of kumu hula Cy Bridges, who is now retired from the Center, but eventually languished for about the past 20 year until Krueger jump-started it again in August 2017.

In addition to teaching them new hula for A Light on A Hill and coordinating with the other participating groups, Krueger also compiled 17 songs, including 12 new songs he composed and sang on the pre-recorded background audiotapes.

Krueger gives ‘many thanks’

“Many thanks go to countless hands who helped put this production into order.” He described all of their contributions as “a humble offering through our cultural lens to the beauty, joy and sacredness of the Laie temple. My hope as a kumu hula is that we can leave a mark for our children, so that they will know how much we cherish the temple.”