The Polynesian Cultural Center recently participated in a media blitz on the U.S. East coast that included our Samoan Culture Ambassador Creasepaul Tofa. He is a traditionally raised Samoan who enjoys sharing his heritage with both visitors and urban Samoan students: 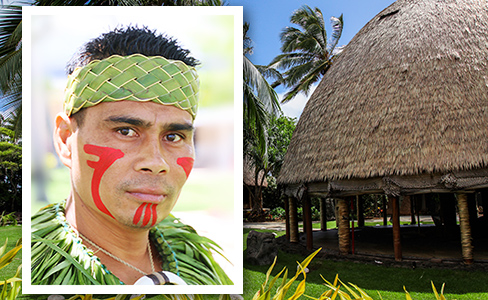 Creasepaul “Crease” Tofa, one of the Polynesian Cultural Center’s Samoan Village culture ambassadors, grew up farming, fishing and cooking for his family in the small village of Saipipi on Samoa’s biggest island, Savaii, and is also a skilled Samoan drummer, fire knife dancer, carver and weaver.

Crease’s first name approximates the name of his mother’s favorite movie when he was born, Grease, combined with the name of an uncle. He first started working at the PCC in 1999 as a Brigham Young University–Hawaii student. His knowledge of Samoan oratory, along with the protocols an cultural practices and values and openness in sharing this knowledge in a meaningful way has made him both well recognized and greatly appreciated by guests and staff members alike. The PCC hired him n 2008 as a Samoan Culture Ambassador to help with presentations, coconut tree climbing, husking, wood carving, weaving baskets and other items, and to sometimes teach those skills to new student employees in the village.

One of the first things PCC visitors might notice when they meet Crease is his traditional Samoan tattoo, which extends from his rib cage to just below his knees. “That’s part of my family, who requested that I get one. It’s a rite of passage to prepare a young man to become a chief.”

Crease explained it took a skilled Samoan artist 14 sessions, each lasting three-to-four hours, followed by six months of healing to complete his tattoo. “Every session was very painful, because the artist used traditional tools made from boar’s tusks. Other men held me down and made sure my skin was stretched tight so the design was straight. I couldn’t take any drugs or painkillers, because they said if I did, there would be too much blood coming out. After my tattoo was completed, we held a ceremony showing that I was a ‘newborn man’ worthy of someday holding a chief’s title.” 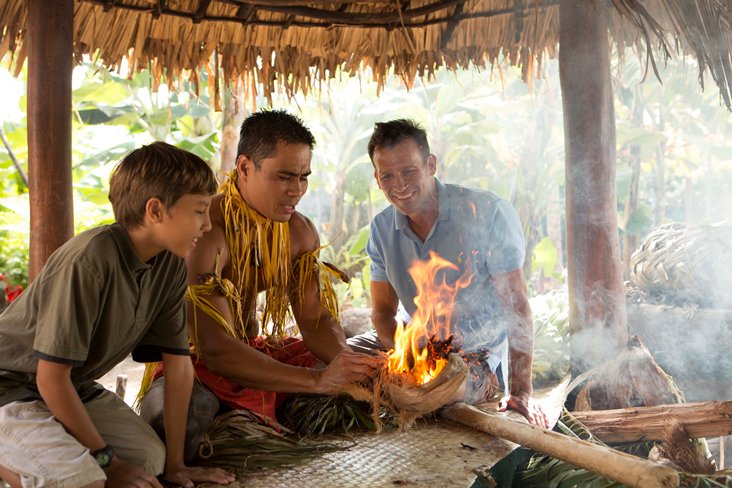 Creasepaul demonstrates one of the most important parts of Samoan cooking

In Samoa the men gather the food…

Crease said he learned food gathering and preparation as a boy in Samoa working several days a week with the coconuts, dryland taro, manioc and bananas on the family plantation, and especially on Saturdays when he helped gather food for the Sunday feast. This is such an important custom in Samoa that the word for the feast, to’ona’i, is also part of the word for “Saturday,” when a lot of the preparation takes place. He added this is where he also learned to weave coconut-leaf baskets to carry the produce home.

“My grandfather would take us out in the outrigger canoe to lay fishing nets. Other times we would go fishing with bamboo poles; but my favorite was free diving and spear fishing. In fact, I still go out night diving in Hawaii.”

…and do the cooking

“Then every Sunday morning I had to help cook, not only for our family but also for my grandfather, who would go to the village meetings and had to take food with him. We had to get up before 5 o’clock, and by the time the sun came up everything was covered in the umu, a traditional Samoan oven made with heated rocks. After church, we would all have a to’ona’i feast together. That’s when we would eat the best food of the week, and on Monday, hope something would be left over.”

Crease said he picked up wood and bone carving on his own, and now likes to carve wooden cooking bowls. “One of the dishes we make in a wooden bowl that I really like is taufolo — roasted breadfruit that’s pounded and mixed with coconut cream and brown sugar.”

Crease said he’s grateful he learned traditional skills while growing up and can now teach them to some of the BYU–Hawaii student employees in the Samoan Village. Some of them, he pointed out, come from urban environments far removed from the tropical Samoan islands. “I especially enjoy teaching some of the young men how to prepare and cook Samoan food,” he said. 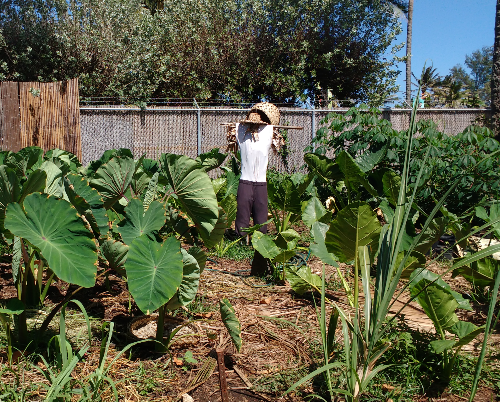 Taro, the staple of a perfect Samoan meal

“For example, there are many ways to cook taro, but one of my favorites is making fa’alifu talo: First, we must scrape off the outer skin of the taro root and boil it. When it’s cooked, we remove the water and add coconut cream. We also usually add a little bit of salt and onions for flavor. Sometimes we bake taro in the umu.”

“Of course, this goes best with palusami. Making this involves slowly pouring coconut cream into the middle of young taro leaves, then carefully wrapping the leaves into a fist-sized ball so the cream doesn’t leak out. Finally, we cook that in the umu, too. It takes a lot of practice to wrap palusami, but it’s very delicious when done right. In fact, it’s the favorite food of most Samoans and others who have tried it.”

Crease said he’s particularly gratified when some of these former students have returned and “personally thanked me for teaching them what I learned growing up, especially the food preparation and cooking.”

Look for Crease the next time you’re in the Polynesian Cultural Center’s Samoan Village.