Guest Blogger J.M. Levi is half-Samoan or afatasi and grew up in Missouri. We are pleased to feature her thoughts on Toa-o-Samoa – Samoans who serve in the military in honor of Memorial Day. 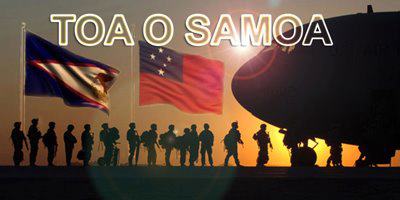 In 1872, Samoa agreed to allow the United States of America to build naval bases at Pago Pago, Tutuila in return for Military protection. (American Samoa became a Territory of the United States in 1900.) Later, during World War II, males 14 years and older trained for the opportunity to serve in the US Armed Forces. My grandpa, Atonio Fuimaono, served in WWII and was stationed at Wake Island in Hawai’i on the island of O’ahu.

My grandpa died a veteran. He was able to come home and continue his life. But, I find myself wondering how he came to serve—was it something his parents put him up to or did he enlist on his own accord? And what if he had died while serving? Would he have been surrounded by friends and loved ones as he was when he passed away at home? Or would he have been in a strange land surrounded by strange people?

Pieces of this make-believe scenario are unanswerable, but after talking with a friend and co-worker at the Polynesian Cultural Center, Chance Meredith, I know my grandpa would have been surrounded by friends and loved ones no matter where he died. The Samoan culture provides a natural brother-/sisterhood among those who are willing to accept their love and friendship regardless of ethnicity.

When I picture a Military Base, I picture strict rules and punishments and only enough energy to eat and train. It has always felt like a recipe for loneliness, to me.

However, Meredith, who serves in the US Army Reserves, tells me that while in service of the military, the bonds strengthen as Samoans and other Polynesians reminisce about their upbringings. He says that they talk about “how they overcame the odds and how they suffered to get to where [they’re] at. And it makes them [appreciate] what they have become, unifies them, and makes them fight for the same cause.”

Unity within the ranks is an important factor to success, as well as a load off of the leaders. It also helps to ease the sense of isolation for those serving. To emphasize the idea of unity and family when there are no blood relatives around, Meredith states, “We get together as families when [we’re] off duty. [That’s] all we got when [we’re] off the clock, we usually all get together, play volleyball, and have bbq.”

Although serving in the US Armed Forces is not all fun and games, it’s comforting to know that time exists where they can reflect, connect, and reminisce. As we concluded our conversation, Meredith says, “We all know how Samoans run our families so we run all of our families together so we [don’t] miss home as much, [‘cause] we still need to be there to fight for freedom [and] get gain for our families back home.”

Even though Samoa is only a territory of the US, the patriotism of Samoan Nationals is as strong as any American. In an article for the Samoa News, Aumua Amata says, “Sadly, we have suffered disproportionately greater combat casualties than any other U.S. State or Territory but although I do not have statistics to prove it, I believe American Samoa also provides a disproportionate number of Army enlisted leaders as well.”

Toa o Samoa means “Warriors/Heroes of Samoa.” The Samoans serving in the US Armed Forces welcome all their fellow soldiers into their circle. As long as there are Samoans (and other Polynesians) serving, others serving will have a brother/sister for life. Your loved ones did not die alone, and those serving are not alone.

So, as we remember those who’ve given their lives in service for the freedom of the US, remember also that they were likely surrounded by friends and loved ones. We are still free in the US—their deaths have not been in vain. Let us honor their sacrifice by making the most of our days we have right now. Tomorrow is not promised, but thanks to our brothers and sisters in service, we have our freedom today. 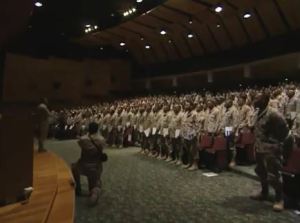 About Jerrica
My name is Jerrica M. Levi and I am married to Mark Levi, who is training to be a supervisor at Subway in Laie. I am Afakasi (half-Samoan) and a member of the Church of Jesus Christ of Latter-Day Saints from Missouri. In April 2014, I received a Bachelor of Arts degree in English, minor in Psychology. Now, my professional title is a Part-Time Instructor for the English Department at Brigham Young University-Hawaii teaching English 101.

I suffer from Post-Traumatic Stress Disorder (PTSD) and hope to become a strong and professional beacon for others who struggle with likewise symptoms. Life is tough, but bit by bit, we can make it through. Keep your head high and do not be ashamed of your healing tears.