Throughout history people all over the world have used proverbs — a general statement of truth or advice drawn from observations of surroundings or actions. For example, one of the best-known English-language proverbs, “a picture is worth a thousand words,” means images usually help a person understand emotions and/or messages better than written or spoken explanations.

Well, it turns out Polynesians also particularly love proverbs using their own respective languages and references. Here is an example from Tonga that you might find interesting:

Tonga: ‘The almond tree and the food basket’ 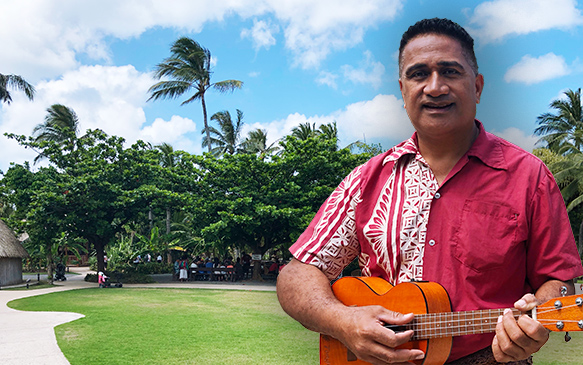 Semisi Fakatava, assistant manager of the Polynesian Cultural Center’s Tongan Village, with a telie or almond tree in the background.

We asked Semisi Fakatava, assistant manager of the Tongan Village at the Polynesian Cultural Center, to share a proverb he remembers from his days of growing up in Tonga. He looked across the village green, thought for a few moments, and then shared this palovepi (proverb):

Fakatava said this saying literally refers to anticipating a basket of food hanging from the branches of a telie tree. The telie, he said, is a type of almond tree like the shady one on the other side of the Tongan Village. But as with many proverbs, Fakatava pointed out this proverb also has a deeper reference.

“Every time we saw our grandparents going to the farm, we would say, let’s go and check the telie tree at the end of the day,” Fakatava said. “Or in other words, our grandparents would always leave the best for us. We always looked forward to the little gifts they left.”

So, while it may take many forms, it seems the love of grandparents for their grandchildren is universal; and in Tongan culture, might mean hanging a basket of food from an almond tree.

Story and photo by Mike Foley, who has been associated with the Polynesian Cultural Center for over 50 years. He had a long career in marketing communications, PR, journalism and university education before becoming a full-time freelance writer and digital media specialist in 2002. Foley learned to speak fluent Samoan as a Latter-day Saint missionary before moving to Laie in 1967, and he still does. He has traveled extensively over the years throughout Polynesia, other Pacific islands and Asia. Though nearly retired now, Foley continues to contribute to PCC and a select few other media.

He recalls as a young missionary conversing with old Samoan chiefs, it was customary to include respectful proverbs in their discussions. For example, to conclude a lengthy discussion, one might say, ua vevela le fala — “the pandanus-leaf mat [we were sitting on] is hot” — a culturally more elegant way to say in other words, it was time to go.