Why Mauna Kea protectors are supported by PCC 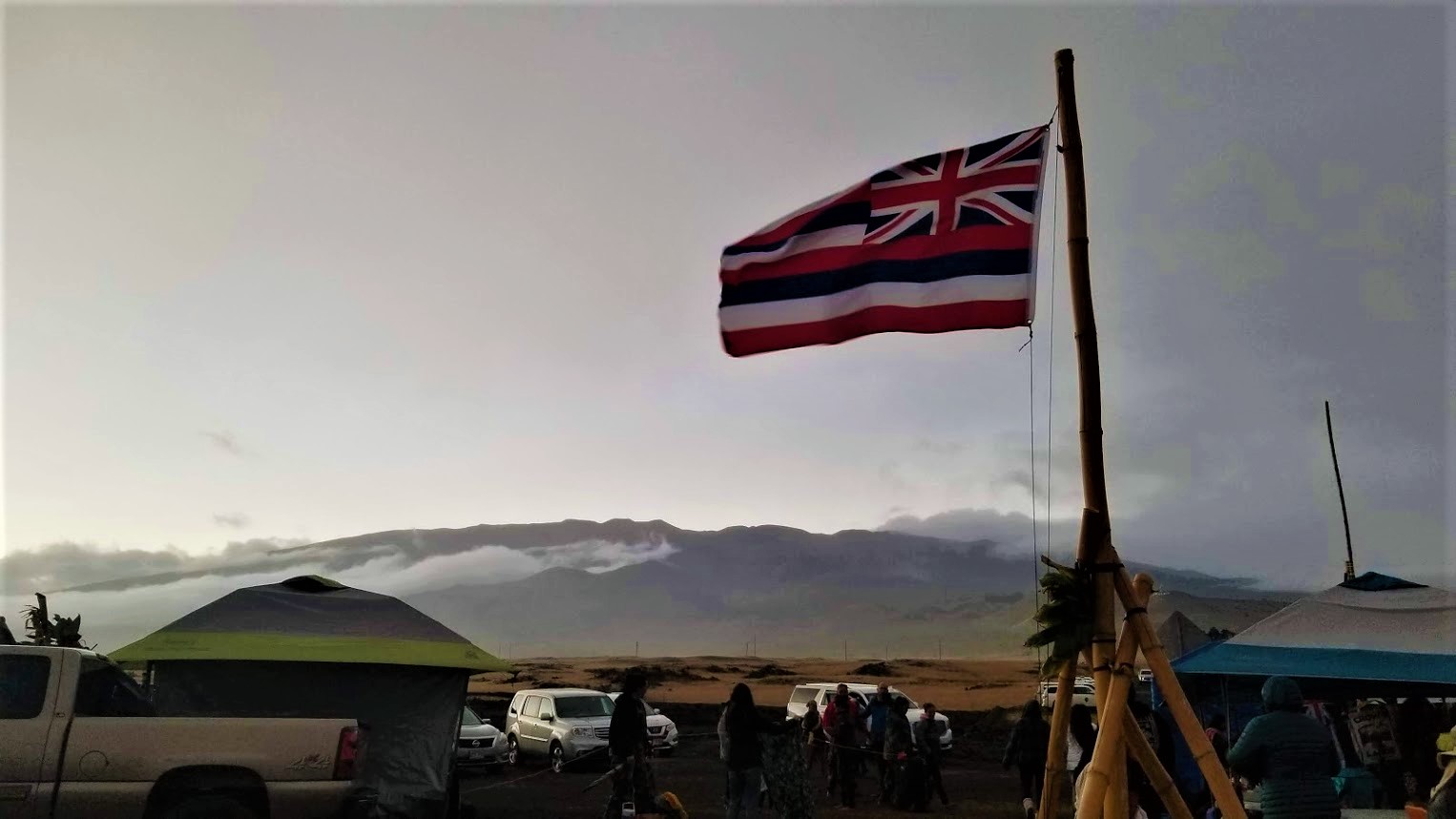 Many of our visitors wonder what the Ku Kia’i Mauna demonstrations on Mauna Kea are about and what the Polynesian Cultural Center’s position is on this issue.

Cast members of the Polynesian Cultural Center’s evening show, HA: Breath of Life, show their support for the Hawaiian “protectors” of Mauna Kea on the Big Island. (PCC photo)

President and CEO Alfred Grace met with PCC employees on July 25, 2019, in the Hawaiian Journey Theater to explain why the Center is supporting Hawaiians who are currently and peacefully demonstrating near the summit of Mauna Kea against building a new 30-meter astronomical telescope there.

Because of the significance of this issue, the Center’s Ha: Breath of Life (night show) cast members share a brief display of support and PCC the Hawaiian Villagers also openly answer visitor guests’ questions about this sensitive issue. 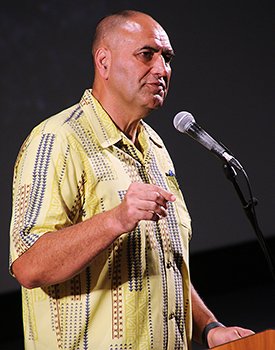 Grace, a Maori from the Taupo region of New Zealand’s North Island, started his comments by chanting his ancestral descent in Maori. The chant includes reference to Tongariro, “my mountain.”

He stressed that the Polynesian Cultural Center’s support for the Hawaiian kia’i efforts is based on the following:

Grace pointed out that it has always been the PCC’s primary mission “to preserve and portray the cultures, arts and crafts of Polynesia in a unique and uplifting way.”

“Kapu aloha, the spirit of aloha shared in a sacred way, has been very significant in our decision to support what is happening on Mauna Kea.

“As kapu aloha extends and uplifts people who visit Mauna Kea, we’re supportive of that,” Grace added. “It’s a significant part of who we are as Polynesians. It’s important to remember that. We’ll continue to support Polynesians who practice kapu aloha,” said Grace, including their constitutional rights to peaceful protest. 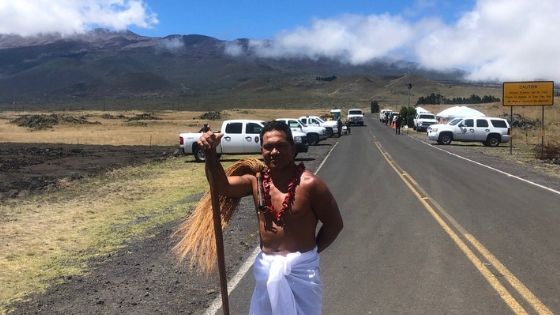 Our Samoan cultural representative, Kap Teo-Tafiti, stands at the base of Mauna Kea during a recent visit. Photo courtesy of Kap and Tiare Teo-Tafiti.

The symbolism of sacred mountains 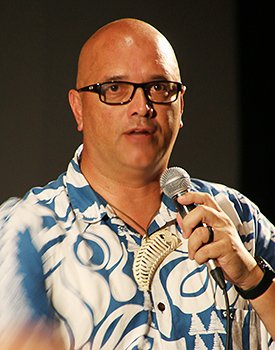 Earlier in the meeting, PCC director of talent development Seamus Fitzgerald, also a Maori from New Zealand’s Taupo region, explained that mountains have been sacred to most indigenous people and world religions, including Christianity, throughout history.

He showed pictures of “sacred mountains” in Polynesia and other parts of the world, including Mt. Fuji, the Temple Mount in Jerusalem, and Horeb (or Sinai), where God commanded Moses to remove his shoes because “the place whereon thou standest is holy ground” (Exodus 3:5 KJV).

He pointed out that centuries ago when the first Hawaiian canoes approached the Big Island from the southeast “the tallest mountain they would have seen was Mauna Kea. The first inhabitants would have climbed that mountain and built an altar on top. They named it Mauna a Wākea, the mountain of Sky Father.”

Fitzgerald added it actually “hurt my heart a little when I heard people saying Mauna Kea is sacred to Hawaiians. It should be sacred to all of us. Is it sacred to God? Are we Mauna Kea? The whole world is Mauna Kea.”

Fitzgerald said he’s grateful to be a part of the PCC. “That name, the Polynesian Cultural Center, is a kuleana that we carry to contribute to the educational development of all people, starting with our guests who come to see us each day.”

“Don’t be afraid to share with them,” he told his fellow employees, “what we think and how we feel about sacred places — our wahi kapu.” 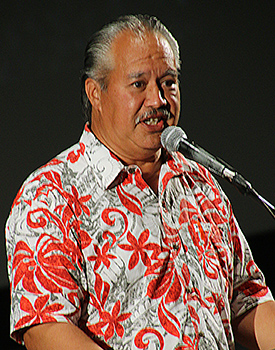 Earlier in the meeting, Hawaiian Village manager Terry Naauao Panee confirmed that some visitors want to know more about what’s happening on Mauna Kea. He said few of them understand the sense of aloha ‘āina, or the “love of the land”, most Hawaiians feel for these islands. Some still agonize over the historical conflicts that arose when private citizens, primarily American businessmen with US military support, overthrew the lawful Hawaiian monarchy in 1893.

They went on to form a provisional government that dissolved the Hawaiian Kingdom in 1895. They lobbied the U.S. to annex the provisional government in 1898, and formed the Territory of Hawaii into a territory in 1900. Hawaii became the 50th state on August 21, 1959, but questions about the legality of the overthrow and the disposition and use of former crown lands (including the summit of Mauna Kea) are still debated today.

“Why are people protesting?” Panee asked. “It’s not just the telescope. They don’t want anything on the mountain.” He added that most of the earlier telescopes were built without proper permitting.

“There’s a history of mismanagement [according to state audits], and every telescope built has had opposition. So, this is nothing new.” However, in the case of the TMT, he asked again, “When is enough, enough? Our protectors are taking a stand. Now is the time to stand together.”

He agreed with Grace that kapu aloha rules are the big difference this time. “In the past, everything was confrontational. This time, everybody treats each other with aloha, like our kupuna [elders] taught us.

“If you talk to anyone who has visited the mountain in the past several weeks,” Panee continued, “people say the feeling there is pure aloha.” He also said anyone who goes up there should be prepared to help. “And remember, everything is done with kapu aloha.” 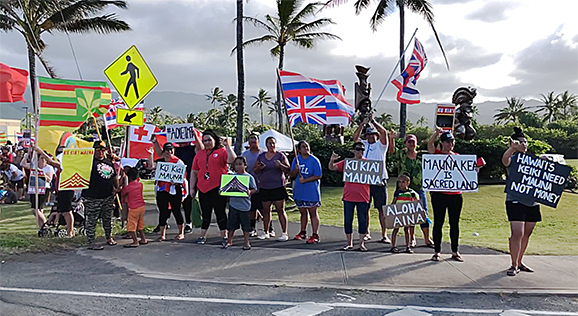 Several from the PCC have recently been with the kia’i  on Maunakea. Meanwhile, Laie and other nearby community members also recently showed their support along Kamehameha Highway (in front of the Polynesian Cultural Center) for the Maunakea “protectors.”

Some definitions and background info: 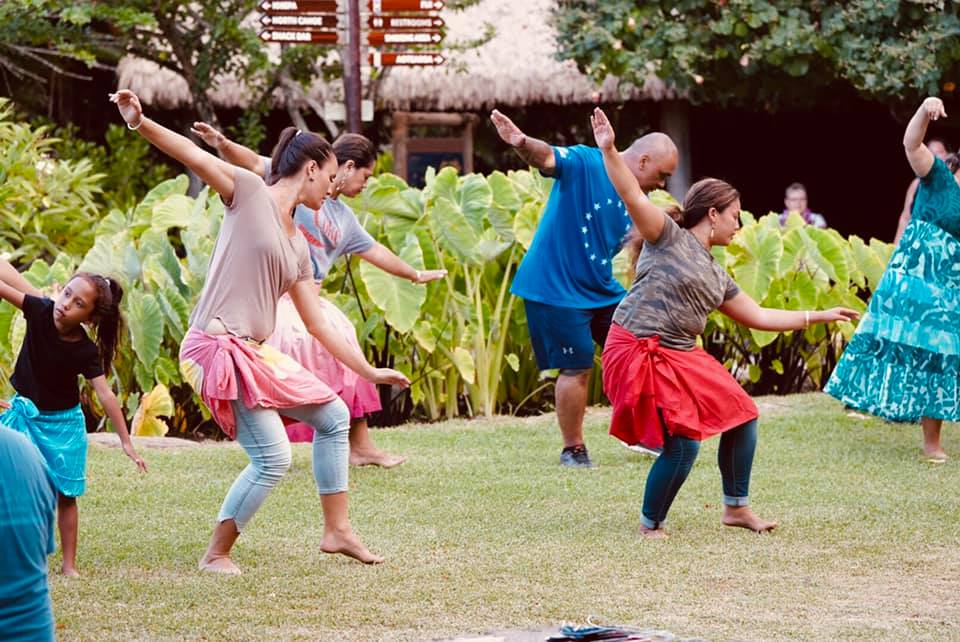 Staff and community members join to learn the Hula Pahu, a traditional hula used to strengthen the morale of native Hawaiians.

PCC visitors who want to know more about this subject should visit our Hawaiian Village and dialog with our employees there.

Watch a video clip of the PCC night show’s support for Mauna Kea.

Story and photos (unless otherwise labeled) by Mike Foley, who has been associated with the Polynesian Cultural Center for over 50 years. He had a long career in marketing communications, PR, journalism and university education before becoming a full-time freelance writer and digital media specialist in 2002. Foley learned to speak fluent Samoan as a Latter-day Saint missionary before moving to Laie in 1967, and he still does. He has traveled extensively over the years throughout Polynesia, other Pacific islands and Asia. Though nearly retired now, Foley continues to contribute to PCC and a select few other media.