Last summer seems like an eternity ago.  In May of 2019, Barrie and Lisa traveled all the way out to the Center to commemorate 50 years from their original visit as honeymooners in Hawai’i. They wanted to recreate a photo they had taken here all those years ago. They only had an hour before they needed to head back to the airport to fly home, so they were reluctant (as anyone would be) to pay for full-day admission to the Center just to take this photo. Sister Gurr and Sister Schulz, service missionaries in our Guest Services Department who had just met them and heard their story, wanted to do something for them.

Of course! We love these kinds of stories of love, and romance, and returning home to a place special to your heart!

They only had an hour, so we comp’d them admission as a Happy Anniversary gift, and Tyrone Brown, our Training Supervisor, took them on the shuttle cart deep into the island-villages to the Marquesan Tohua, where this stone carving is still located. They were able to recreate their honeymoon photo and share some fond and loving memories. They talked about what they remembered from their first visit, and how much they liked the changes they saw. There was a definite spring in their step and a sparkle in their eyes as they took this short walk down memory lane. 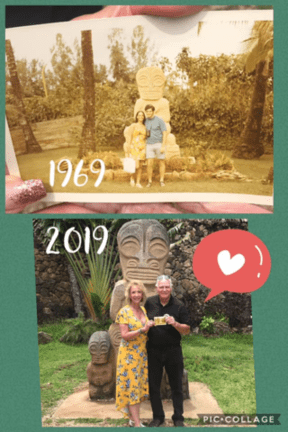 54 years ago, Chuck was serving in the military, stationed in Thailand. He met the LDS missionaries & made the choice to be baptized. He wrote a letter home to his young wife Grenda, not knowing how she would react to the news. Little did he know, halfway around the world, at the very same time, his wife had also met the missionaries & had made the same decision to be baptized! The spirit was working to bring these two wonderful people to Christ at the exact same time, even though they were several oceans and continents away!

In 2013, they visited the Center and “by chance”, met their tour guide, Thantita, from — wouldn’t you know it! — Thailand! They told her about their conversion story and how powerful the spirit was at the Center. They said they knew that they were led to the Center. ”Of their time together on tour, Thantita said, “I felt so blessed to escort them around the Center that day. They helped to strengthen my testimony by showing me how much they love the gospel and how much they love and care for each other. At the moment I took this picture of them hugging and smiling at each other, doing the Maori ‘hongi’, I imagined me and my husband in 54 years. The gospel is true. As long as we keep the covenants we have made with our Heavenly Father, happiness is ours forever.”

So grateful to those who have been able to create such wonderful memories at this special place and keep those precious memories alive in the stories they share. 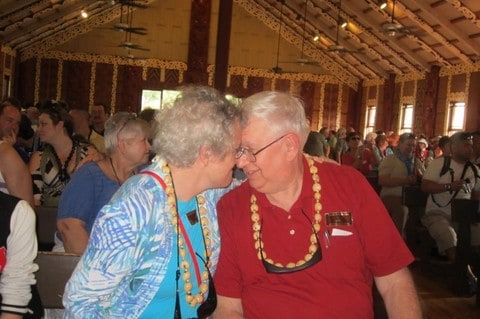