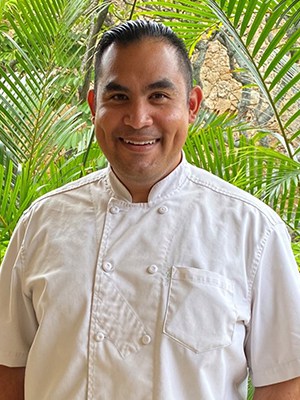 We are grateful to have an amazing employee like Chef Felix!

To be a good chef, you have to love and understand food and how ingredients are layered to create aromas and flavors that make your mouth water. The Polynesian Cultural Center’s Executive Chef Felix Tai is ready to change the world one plate at a time. His love affair with food began even before he was born.

Chef Felix was born in Malaysia to a family who loves and prepares good food. It is only natural that Felix’s love of food started with his mom who ate good food to nurture a healthy pregnancy. He likes to say that the love of good food is “literally in his blood.” Felix’s grandfather was a Chef who owned his own restaurant in Malaysia, When Felix was born the mantle of “Chef” passed to him and the families love of good food continues. He has become the guardian of family recipes and uses those influences and flavor profiling to create delicious dishes wherever he goes because of his culinary background and foundation.

Felix’s culinary journey began when he was 6 years old, learning how to cook from a young age. Soon after graduating high school, Felix was drafted into the military before serving a mission in Singapore. After his mission, Felix attended Culinary School in Malaysia before coming in BYU-Hawaii to study Hospitality and Tourism Management. While a BYU-Hawaii student, Felix worked in the Fiji Village than transferred to the Samoa Village where he worked as a demonstration guide for 2 years. He learned to climb the coconut tree and make fire, but his love was for umu cooking. He wanted to be able to cook and develop a relationship with guests visiting the Polynesian Cultural Center.

After attending BYU-Hawaii, Felix decided he needed to take a bigger step into the culinary world. He moved to the mainland and started cooking for some high-profile VIP clients in Park City, Utah and started teaching cooking classes in Provo. He loves sharing his passion for food with others. To progress further in the culinary world, he went to St. Regis and then moved to a Michelin Star restaurant to work with master chefs. Soon, Hawaii was calling him home. His next move was to start a food truck in Hawaii which was very successful. Then, in 2015, the Polynesian Cultural Center opened Pounders Restaurant and Felix was the Chef there until 2019. He next opened a restaurant in Waikiki and became the corporate Executive Chef for a group of well-known, award-winning restaurants in Honolulu until COVID changed the world. In 2020, Chef Felix came back to the Polynesian Cultural Center as the Executive Chef. He oversees the Food and Beverage Department and is in charge of the core products served at the Luaus and Gateway Restaurant. He also provides culinary support to Pounders Restaurant and any concessions sold at the Center.

Chef Felix describes himself as bold, direct and funny. On his journey through life, he has had some interesting experiences. For instance, when Felix was 12 years old, he and a cousin decided they needed jobs during their school break. They approached a number of small businesses that were close to where they lived and were hired by a T-shirt printing company.  After working for two days, Felix’s cousin decided he needed some of the gold paint with glitter used to paint the T-shirts for his hair. The cousin took some of the paint into the bathroom and when water was added, the glitter dispersed into the air enveloping the whole bathroom. The cousin was fired and Felix went with him.

Chef Felix is relatively young for an Executive Chef. He has seen the world and is grateful for his many life experiences. His passion is to build bridges for the next generation and to change the world one plate at a time. Recently, he received the opportunity to mentor students at BYU-Hawaii which has been a long time coming. He is teaching an elective credit class in Culinary Management. Students are actually brought to the PCC kitchens where they will learn about culinary management, food, culture, tradition and love. Chef Felix believes that food is emotion and art which is one way to heal the world. He is making sure that a PCC food experience becomes part of a visitor’s memory of the Polynesian Cultural Center.

Article #2:  Mahalo-ve: One Love, One Gratitude 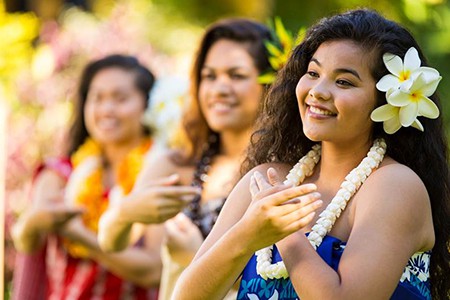 Today’s Guest Blogger, John Paolo Asetre, explains the deeper meaning of the word Mahalo-ve. It is a feeling of gratitude for the many blessings one receives. Read the full blog here!

When you choose to place anything in front of a fire extinguisher, you are putting every person in that building or in that area at risk of injury or death. Fires evolve rapidly and every second counts. Thus, in a fire emergency, taking the time to remove items from in front of the fire extinguisher or having to work around those items will waste valuable response time allowing the fire to grow in size and intensity, causing a greater danger to all.

Fire extinguishers should never be blocked

The employer shall provide portable fire extinguishers and shall mount, locate, and identify them so that they are readily accessible to employees without subjecting the employees to possible injury.

Do not block fire extinguishers for any reason or for any amount of time – no matter how short the time.