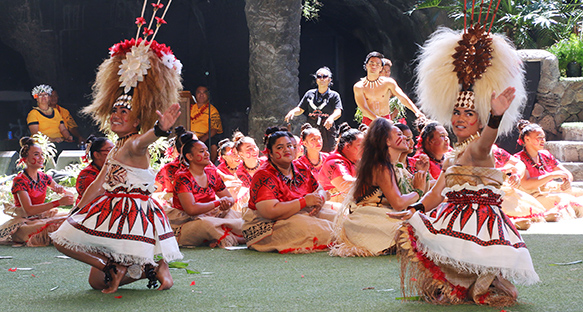 Hundreds of Hawai’i high school students practiced for months to learn traditional Samoan customs, songs, dances and household chores so they could share them with several thousand parents and fans on Saturday, May 11, 2019, during the Polynesian Cultural Center’s 27th annual We Are Samoa festival.

The festival is held each year in conjunction with the PCC’s World Fireknife Championships, which has its own tradition of being a don’t-miss event. As in years past, the entire Pacific Theater was sold out. Many more people from around the world watched the performances via internet live-stream broadcast.

We Are Samoa is not a modern innovation. It has grown from traditional festivals and fairs held throughout Polynesia for centuries. Festivals from the past often featured races such as coconut tree climbing, husking coconuts, weaving baskets, carrying heavy loads with an amo — a pole carried across the shoulders with burdens suspended from each end, and more. All of these were, and still are, hugely popular throughout the islands.

In earlier years, the PCC event was also a competition among the participating high schools, but today’s festivals focus on encouraging a spirit of fealofani, or brotherly love, among the students. The fun comes naturally.

Samoans almost always start events with a prayer, and in the case of the PCC’s 2019 We Are Samoa festival, everyone stood and as the respective flags were raised over the Pacific Theater stage, and participants and guests alike sang the U.S., Samoa and American Samoa national anthems.

Oratory is serious business in Samoan culture. Tulafale or talking chiefs are revered leaders. Indeed, they often try to out-talk each other, using an especially rich vocabulary of respectful words, allusions, proverbs and historical references.

Four brave high school students took the stage next, to deliver their own such speeches, called lauga in Samoan.

With the serious ceremonial protocol accomplished, it was time to begin the games. PCC’s Director of Islands Matuauto Steve Laulu shared that “…these are household chores we had to do every day when I was growing up.”

■ Husking coconuts (o’a popo): Samoans traditionally use a sharpened stick (mele’i) to remove the husks; and while some of the students struggled, at least one community member invited on stage after them husked a coconut in just a few seconds. 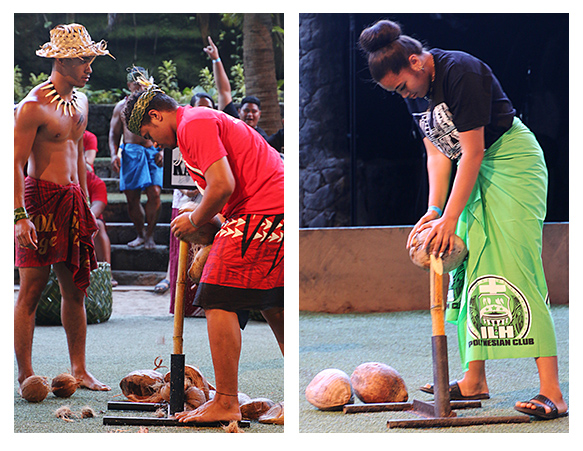 A Kahuku High boy (left) and an ILH Poly Club girl (right) use an ancient Samoan method to husk coconuts. 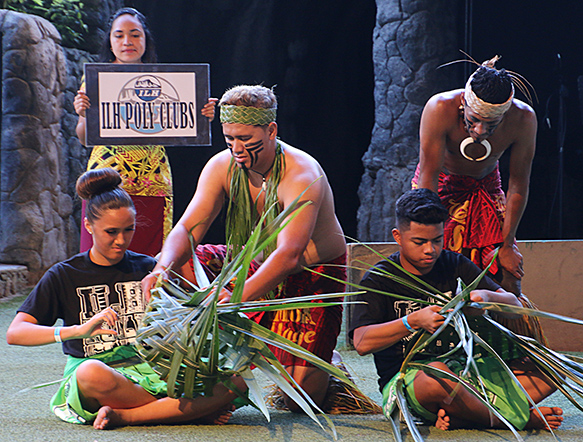 PCC Samoan Villagers offer a little help to the ILH Poly Club students as they attempt to weave coconut-leaf baskets.

■ Peeling green bananas (fo’e fa’i): Using a knife-like piece of bamboo, students pry the tight-and-sticky green skins off several bananas (which will then be ready to boil or bake). Tradition requires they do so without dinging or breaking the bananas.

■ Making fire (si’aga afi): Even though PCC Samoan villagers such as Kap Te’o-Tafiti make this skill look easy, most of the students over the years usually just generate a little smoke. Waianae High, however, got their fire going right away by rubbing two sticks together. 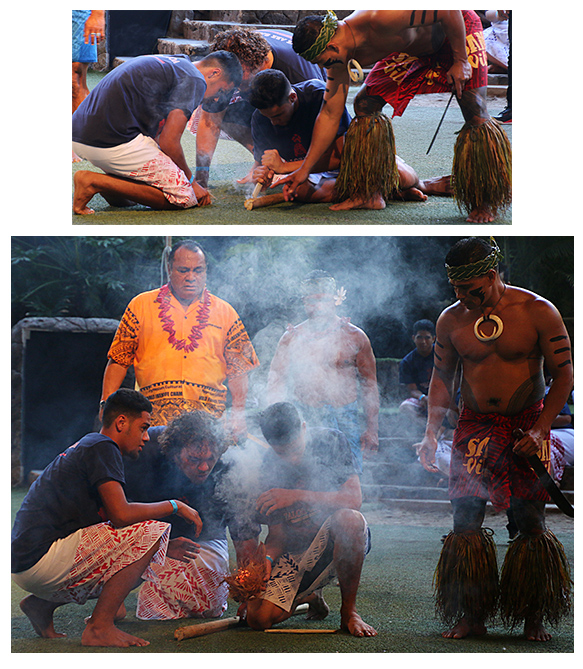 After intermission, Le Fetu Ao Samoan Language Center for youth in Honolulu and Penina o le Vasa (a nonprofit women’s Samoan dance group from Anchorage, Alaska) entertained, then it was time for the participating high school groups to shine. In the spirit of brotherhood, interested students from non-participating schools were then invited to join in. This year, the students themselves also elected to retell traditional legends as part of their performances.

■ Radford High focused on the legend of Pili, who helped divide Samoa into four major districts. 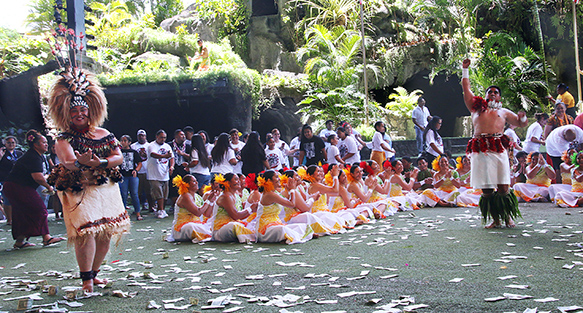 ■ Waianae High traced the legend of Sina and how her brothers covenanted to protect her. 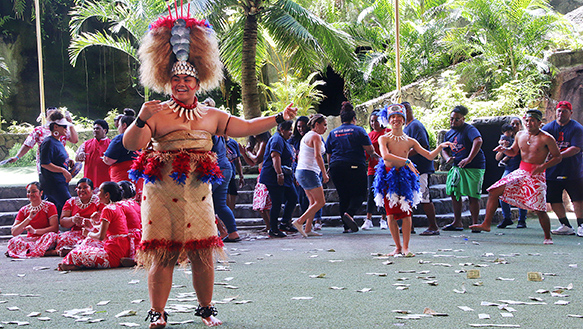 The ILH Poly Club students portray the legend of twin sisters from Fiji bringing the tattoo to Samoa.

A show of appreciation from parents and fans

The parents and fans loved the six-hour event. In keeping with Samoan custom, many of them showered the student performers with money, and even danced on stage with them to show their support.

Each of the schools keeps the donated money, and in addition, the Polynesian Cultural Center provided their own monetary stipend to each participating school  in order to help offset their expenses.

At the conclusion, as is now customary, the high school students all came on stage and sang the title song together, We Are Samoa.

“They did a phenomenal job,” said Tagaloataoa Delsa Atoa Moe, PCC vice president of cultural presentations. “I am really proud of the high schools and how they used the legends theme to put together their entire performances. That required a lot of research, which helped them understand more about Samoan culture.”

Moe also pointed out that “the schools could not do it without the support of their families and communities. They all spent many hours preparing for those 20-minute presentations, learning the songs and dances, rehearsals, costume making. It was a huge effort, and we’re very grateful for all these people who want to support their children’s interest in perpetuating Samoan culture.”

Read about the men’s winners of the PCC’s 2019 Samoan World Fireknife Championships.

Read about the other winners in the PCC’s 2019 Samoan World Fireknife Championships.