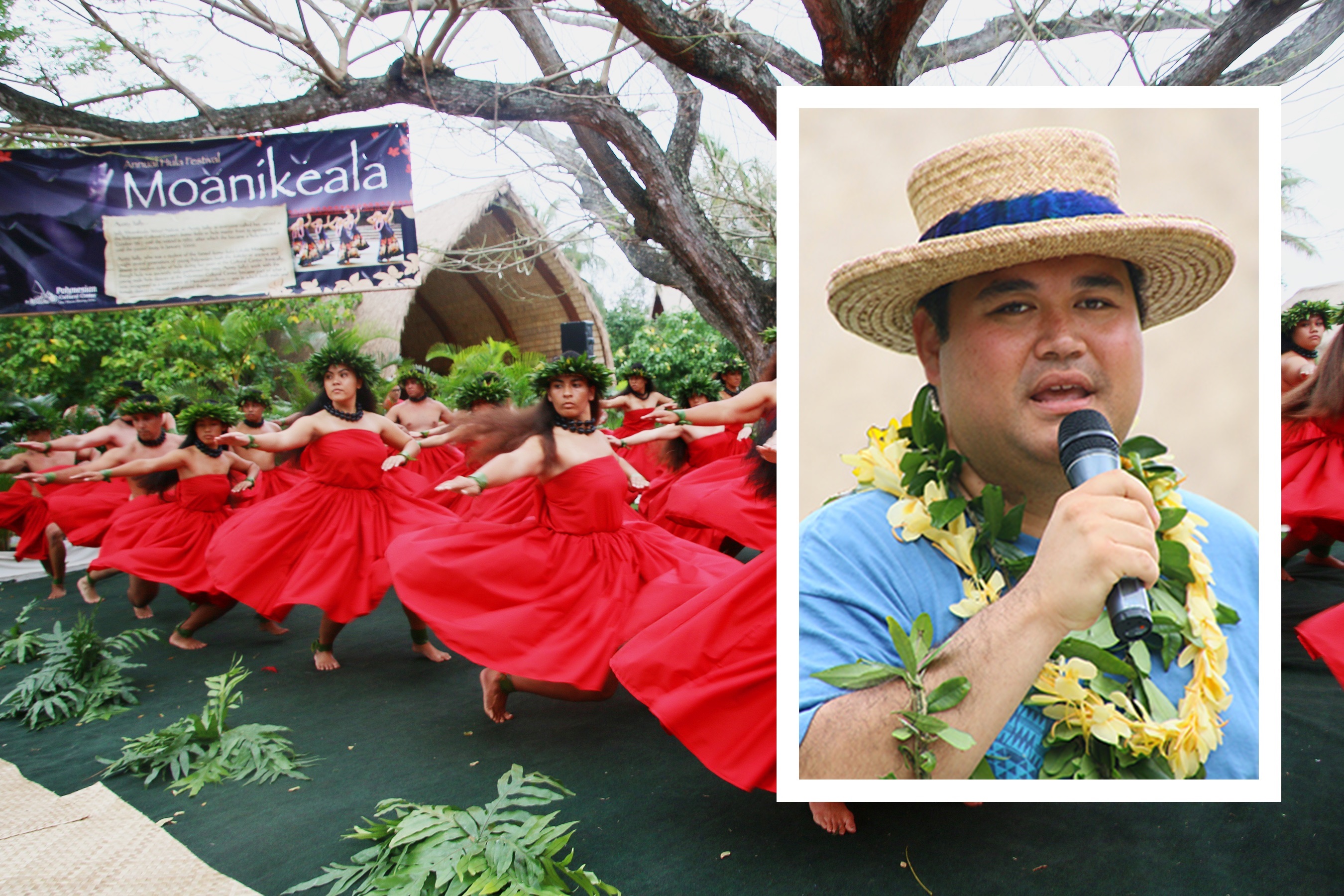 When Hui Ho’oulu Aloha performed in the recent 28th annual Moanikeala Hula Festival on February 3, 2018, it was the first time in more than 20 years that the Polynesian Cultural Center’s own hula halau [school] had appeared in public.

PCC cultural performance specialist and kumu hula [hula teacher or master] Pomaika’i Krueger pointed out the historic origins of Hui Ho’oulu Aloha when he introduced the halau during the recent Moanikeala Festival. In Hawaiian, the name means “the group that grows or nurtures love.”

“When we hired Pomai, one of the suggestions I made to him, once he felt comfortable, was that he consider starting a halau hula at PCC,” said Delsa Atoa Moe, PCC vice president of cultural presentations.

“After a year of working fulltime at the Center,” Krueger said, “I was ready to start a halau… [but] I actually struggled with what I should name it. I realized that it would just be best for me to reopen Hui Ho’oulu Aloha. I talked with former kumu Uncle Cy Bridges and Uncle Keith Awai, and both said they were fine with it.” Both Bridges and Awai recently retired from the PCC, each with more than 40 years of service. The late William Kaiwiulaokalani “Uncle Bill” Wallace III and Enoka Kaina were also kumu for the original group.

“I thought it was a nice gesture on his part to keep the name and continue the legacy that was started by Cy Bridges and those who came before,” Moe agreed. “I’m really happy to see the interest in our halau. We know that historically Laie was where hula continued to be practiced, and actually thrived when the kapu [ban] had been placed on it. Hui Ho’oulu Aloha certainly adds to the rich legacy of hula in this area.”

“I am so proud of Pomai and his vision of what this should and can be,” she added.

Hui Ho’oulu Aloha started practicing in August 2017 with haumana [students] from ages 16-35. The group usually meets on Saturday mornings at the PCC, with Keanu Manoa and his wife, Makana — both graduate students at UH/Manoa; recent BYUH graduate Brent “Bo” Schwenke and current student Ipo Pule as alaka’i [assistants or “leaders”].

In a telephone interview while Bridges was waiting to catch a flight to Japan for a hula event there, he said PCC general manager William H. “Bill” Cravens called him and Wallace into his office in 1979 and asked them to start a hula halau.

They organized Hui Ho’oulu Aloha the following Spring, and asked Awai and Kaina to be the kumu for the women. Wallace soon left Laie to attend BYU Law School in Utah and the others got too busy, so Bridges eventually took over — but with one concern: “I had never taught wahine [women] until then. Since 1971-72, I had been teaching men for the Hawaii State Foundation of Culture and the Arts. In fact, [Hawaiian kumu and musician] Kealii Reichel told me I was his first hula teacher in a workshop on Maui when he was 14.” 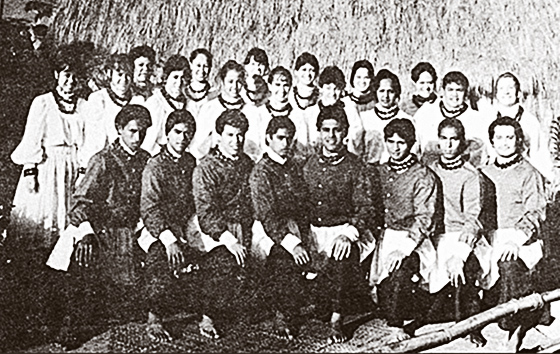 Hui Ho’oulu Aloha thrived in the coming years, and at one point totaled more than 130 haumana, “but when we traveled to Hilo, for example, we would take about 55 people, including the kane [men] and wahine [women] dancers, musicians, and helpers,” Bridges said.

“We held halau practice twice a week at 5:30 a.m. on the theater stage; and when we were preparing for competitions, every day after the PCC night show — either back stage, at the BYU-Hawaii dance studio or the BYUH Aloha Ballroom.”

‘I always felt we had the most international halau, with haumana not only from Hawaii, but also from Tonga, Tahiti, New Zealand and Rarotonga. Local students came from throughout [the nearby district of] Koolauloa, from Kaaawa to Kahuku; and there were others who drove all the way from Honolulu, Wahiawa, Ewa and Nanakuli. One member — Victoria Keola Lono Moune —  flew in each week from Seattle, Washington, as her husband was a commercial airline pilot.”

“Aside from the Akoi brothers [Jay and Bobby], we also had quite a few kane from Keaukaha, Hilo, Hawaii; so, whenever we were in Hilo, Keaukaha was there in force for our halau. Our home base was at the old Keaukaha chapel, which is no longer standing.”

“Our halau was more akin to the traditional halau of old Hawaii, because halau then came under the alii or chief, and anything a halau needed, the chief would provide,” Bridges continued. “PCC provided for us.”

For example, the original Hui Ho’oulu Aloha didn’t have to do any serious fundraising. Students did not pay monthly fees, although they had to learn to gather and make their own traditional adornments. PCC’s own travel agency at that time provided tickets and other arrangements. At no cost to the dancers and musicians, PCC seamstresses made costumes, “although my wife, Iraani, and Donna Brown also helped,” Bridges continued. “Participation was spread throughout the community and Center, and included several PCC managers as well as the late Dr. Ishmael Stagner, a Hawaiian author and BYUH professor, and his wife, Carmen.”

“Even the musicians were all PCC employees, including Jay Akoi and Harry Brown, who are both now retired, as well as Bobby Akoi and steel guitarist Steve Cheney.” 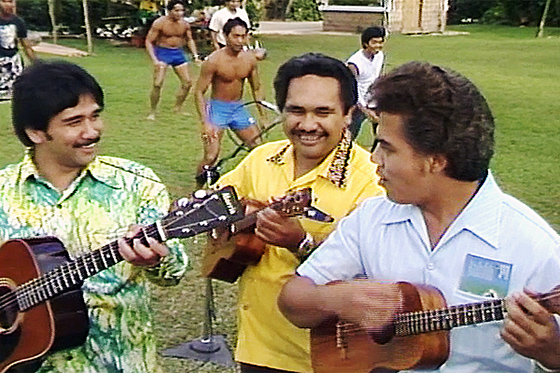 Bridges said the musicians were so familiar with each other, that “we could be in Hilo on the day of the Merrie Monarch, and we would come up with musical changes that we liked. We would call the dancers together and make the adjustments. You would be surprised how many times we did that.”

“Bill Cravens wanted us to be a part of the Hawaiian cultural mainstream. Whatever was happening outside, he wanted us to be a part of it,” said Bridges, who had already been involved with Hawaiian culture on a statewide basis for several years. He adds that by the time he phased out of leading the halau in the mid-1990s, Hui Ho’oulu Aloha had accumulated 58 awards, including several from the Merrie Monarch and King Kamehameha competitions.

Back to the present

While Bridges said he’s pleased to see Hui Ho’oulu dancing again, he quickly added that kumu Krueger doesn’t need any advice from him, “because he already has a cultural and hula lineage.”

“I feel good, because basically Pomai is family to me. His grandmother, the late Marjory Kekauoha — the first solo hula dancer at the PCC, is the daughter of Aunty Lena Nahulu Guerrero, a well-known dancer and kumu hula. Along with Aunty Hattie Au, and Mom and Pop Logan, they were among the PCC’s original Hawaiian Village staff. For many years, Auntie Lena was also a board member of the Hawaii Musicians Union, and one of the recipients honored during the BYUH/PCC Na Makua Mahalo Ia program.”

“They’re all from Laie. My great-grandfather built the Nahulu house, which was exactly the same as the Bridges’ house on Oma’oma’o Street in Laie — now called Moana St. Aunty Lena was tutored by Tutu Luika Pele Kaio, Kela Miller’s great-grandmother, who composed the song Nani Laie. So you see, we’re all connected.”

“Starting Hui Hooulu Aloha in 2017, Pomai is grounded in the culture. He has the language. He has the background — a lot of things that are embedded in him, whereas for us back then it was a new thing to start a halau.”

Hui Ho’oulu Aloha performs in the 2018 Moanikeala Festival at the Polynesian Cultural Center.

Similar to Craven’s original charge in 1979, Krueger said his “main objective is to be able to use Hui Ho’oulu Aloha as a vehicle for the Polynesian Cultural Center to be active participants in the Hawaiian community.”

“In fact, it would be nice if all our island cultures could be more involved in their respective communities; but the reality is that their communities are across the ocean, back in their home islands. There’s no excuse for Hawaii not to represent the Cultural Center at home.”

“My other objective is to reinvigorate Hawaiian culture in [the surrounding district of] Koolauloa. Many people in Koolauloa are proud of their Polynesian heritage; but I’m hoping through Hui Ho’oulu Aloha’s accomplishments, and through the knowledge that is being passed around, that the people will feel more pride in Hawaiian culture.”

That’s already started to happen. The Prince Lot Hula Festival has invited the PCC’s halau to perform in its 41st annual celebration which will be held on July 21, 2018, on the grounds of Iolani Palace in Honolulu.

The invitation grew out of the Moanalua Gardens Foundation, which sponsors the Prince Lot Hula Festival, and presented Bridges with its prestigious Namakahelu  Award in 2017.

“That will be our first ‘big’ appearance in the Hawaiian community,” Krueger said, “but we’re also being asked to appear in the community around Laie. For example, the BYUH Hawaiian Studies program asked us to come for their end-of-semester activity. We were also asked to perform at a recent BYUH food fest, but we were getting ready for the Moanikeala event. That was our first official performance.”

Cy Bridges brings it all together

“Hui Ho’oulu has played an interesting role,” Bridges said. “It has been a special part of my life, with some special people; and I cannot help but wish Pomai all the best. Because of his drive, passion and foundation in hula, as well as his family lineage, I know they’ll be alright.”

“To have a hui that grows or fosters love, as the name says in Hawaiian, it’s going to be all good.”

Story and photos by Mike Foley, who has been a full-time freelance writer and digital media specialist since 2002. Prior to that he had a long career in marketing communications, PR, journalism and university education. Foley learned to speak fluent Samoan as a Mormon missionary before moving to Laie in 1967 — and still does. He has traveled extensively over the years throughout Polynesia, other Pacific islands and Asia. He is mostly retired now, but continues to contribute to PCC and various other media.

Foley had the rare experience of accompanying Hui Ho’oulu Aloha to the Merry Monarch Festival in Hilo, Hawaii, several times as a photographer.