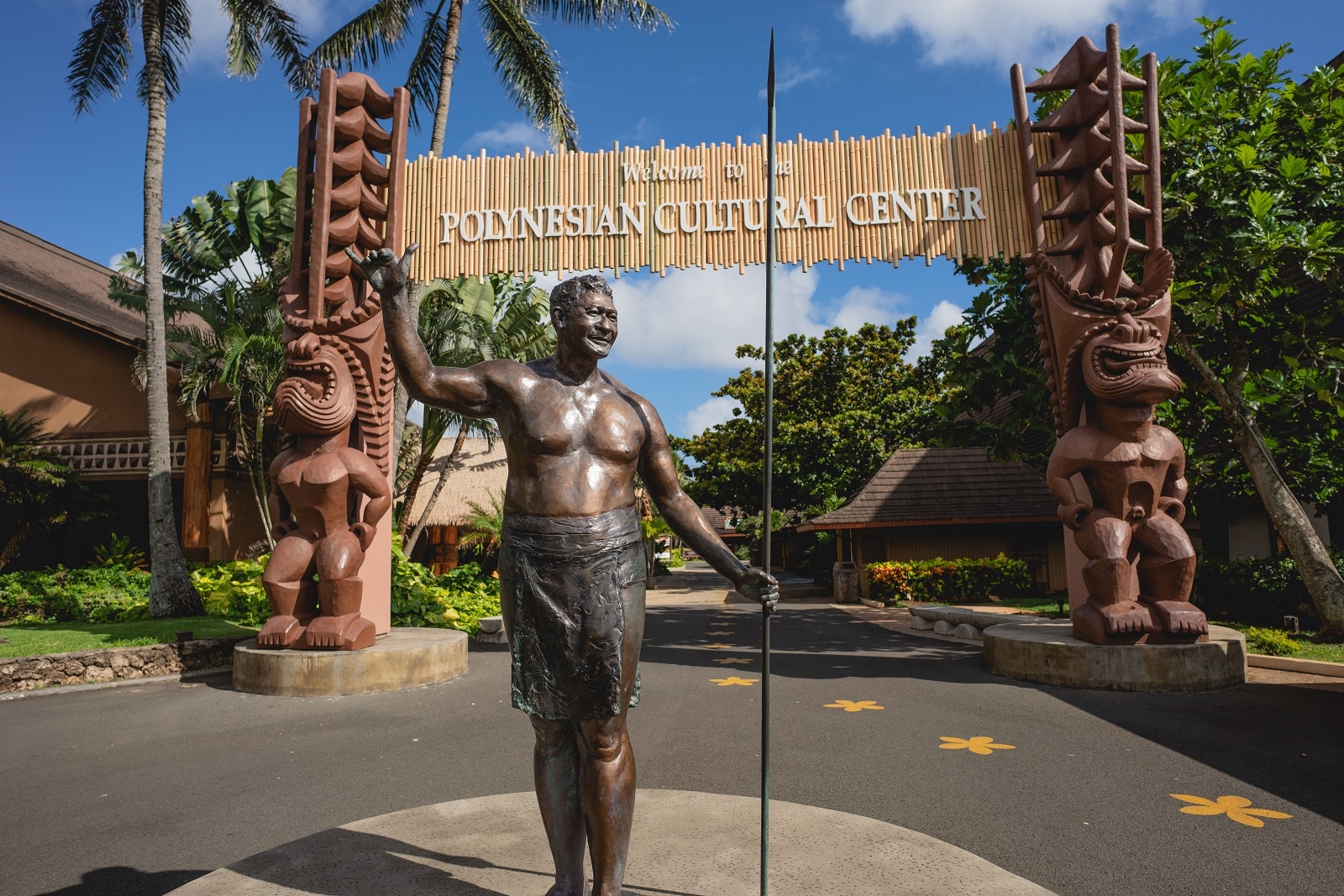 We are constantly asked about our “Shaka Statue”, a beautiful representation of the father of the Shaka, Hamana Kalili. In today’s blog, Jimmy Mapu, head of Guest Services at the Polynesian Cultural Center, shares a question he received and his informative answer. We wish to credit much of this information to Bob Krauss, a reporter with the Honolulu Advertiser from 1951 until his death in 2006. We hope you enjoy this dip into Laie history.

Historical image of Hamana Kalili portraying King Kamehameha with his Royal Court during a Hukilau along Laie Bay.

Tell me the history of the amazing statue at the entrance with the man holding up two of his fingers.

Thank you for the question and the opportunity to share some of our history.,

The statue you’re referring to is of Hamana Kalili, one of the more visible and vibrant part of Laie’s famous “hukilau celebration“, a traditional Hawaiian community hosted fishing event that concluded with a luau complete with entertainment .  When the Hawaiian Royal Court was presented at each of these celebrations, Hamana was there to give his best portrayal of King Kamehameha. The entire Royal Court was represented, including all the princesses and princes for each island, but the most memorable image was Hamana.

Hamana is known as the father of the shaka sign. He had lost his three middle fingers on one of his hands. When he waved to people, he held up the hand that only had a thumb and a pinky finger. The wave caught on, and the rest is history. 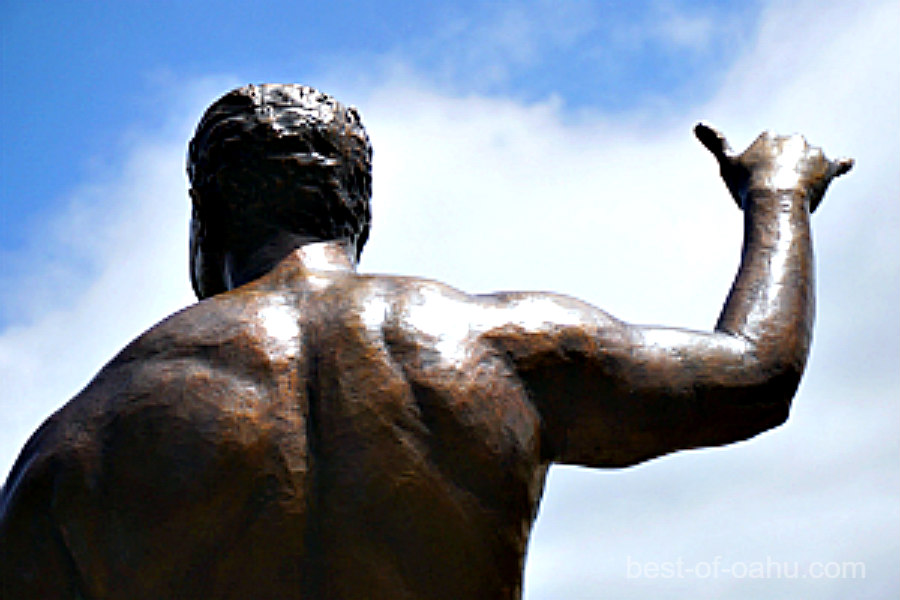 The origins of the Shaka

How he lost the fingers is the subject of local legend. One story suggests they were bitten off by a shark that was interested in the fish Hamana held while fishing underwater. Another rumor proposes that the fingers were blown off while he was fishing the easy way – with dynamite. However, Von Logan, grand-nephew of Hamana, says the true story is that his fingers were accidentally amputated in a sugar mill accident where he once worked.

After the accident, the plantation owners decided to give Hamana a new job in security. His assignment was to watch the trains because the locals kids would ‘jump on the train’ as it slowed down entering or leaving Kahuku. He would yell or wave at them to get off the train. If he caught them, they would get in big trouble with the mill. Eventually the kids adopted his ‘wave’, or what we now call the shaka sign, as an ‘all clear’ or ‘go for it’ sign!  When they used the gesture, it meant that Hamana was not around and everything was ‘okay’ to jump onto the train. Hamana was also a chorister or choir leader in the local church and would lead the congregation singing hymns with his ‘shaka’ sign. 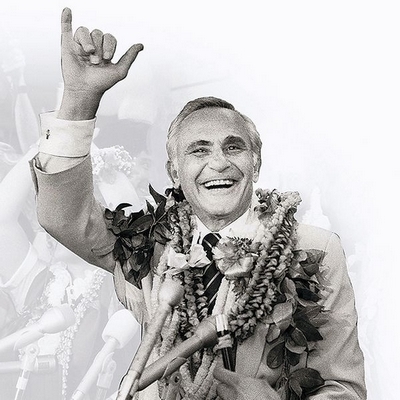 Photo of Frank Fasi, courtesy of the Honolulu Adviser. No copywrite infringement intended.

The Shaka was soon adopted by others

A few years later a very popular local politician named Frank Fasi adopted the sign. He started using the gesture in advertisements. Soon it became his signature signage, helping it gain even more popularity. He served as the Mayor of Honolulu, and used the shaka sign in all of his advertisement for twenty-two years. Fasi held various public offices in Hawaii from 1952 to 2004 (more than 50 years).

Just as these stories live on, so does the shaka sign. We our proud of this homegrown symbol of Laie’s famous Hukilau festivals.

A tribute to Hamana Kalili

In 2015, a heroically proportioned statue of Hamana Kalili (which measures 7’ 6”) was officially unveiled during the opening ceremonies for the Polynesian Cultural Center’s new Hukilau Marketplace. This beautiful bronze tribute was sculpted by former PCC student employee Leroy Transfield, a Maori from New Zealand. Hamana stands day and night as the first one to greet thousands of visitors, and employees alike, each new day. 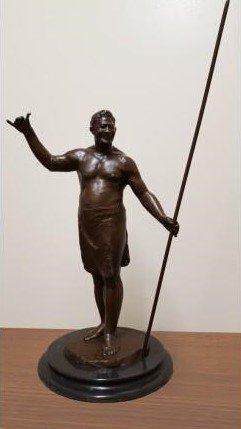 Want your own piece of Laie history? We carry these magnificent statues, by award winning artist Leroy Transfield, a native Maori originally from New Zealand, which are an exact replica of the one that greets you at the Polynesian Cultural Center. It is available to purchase in our on-site store, Hapa Home, and through our online store, TheHawaiiStore.com.